Bree Swarmer and her daughter, Brinlee, live in New Stanton. On May 25, 2018, Swarmer celebrated being clean for 26 months. (Photo by Maranie Rae Staab/PublicSource)

Bree Swarmer’s eight-year struggle with addiction began with the painkillers a dentist prescribed for her after removing her wisdom teeth. She was 15.

“I fell in love,” she said of the Percocet, a hybrid of oxycodone and Tylenol. From there, she found more pills and eventually moved on to shooting heroin. She tried to hide her addiction from her family in Westmoreland County.

But the next turning point in her life made her determined to kick her addiction for good.

“I went to sleep at 15 and woke up at 23, pregnant. I had to learn how to be an adult. You stop maturing when you start using hard drugs. Having to be an adult while you’re raising another human — it’s tough,” said Swarmer, now 25 and living in New Stanton.

By the time Swarmer became pregnant, she had been in and out of drug rehab several times. 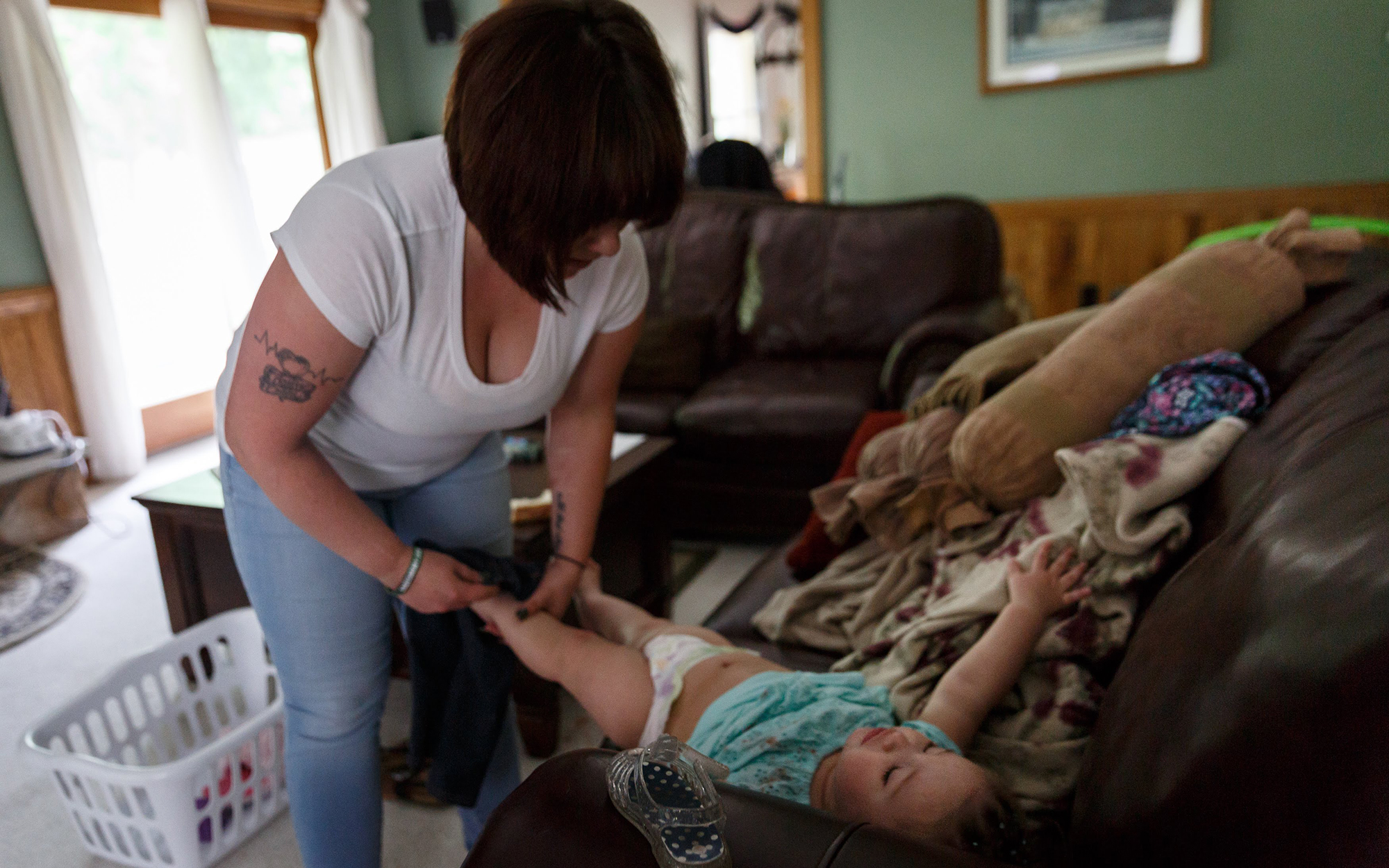 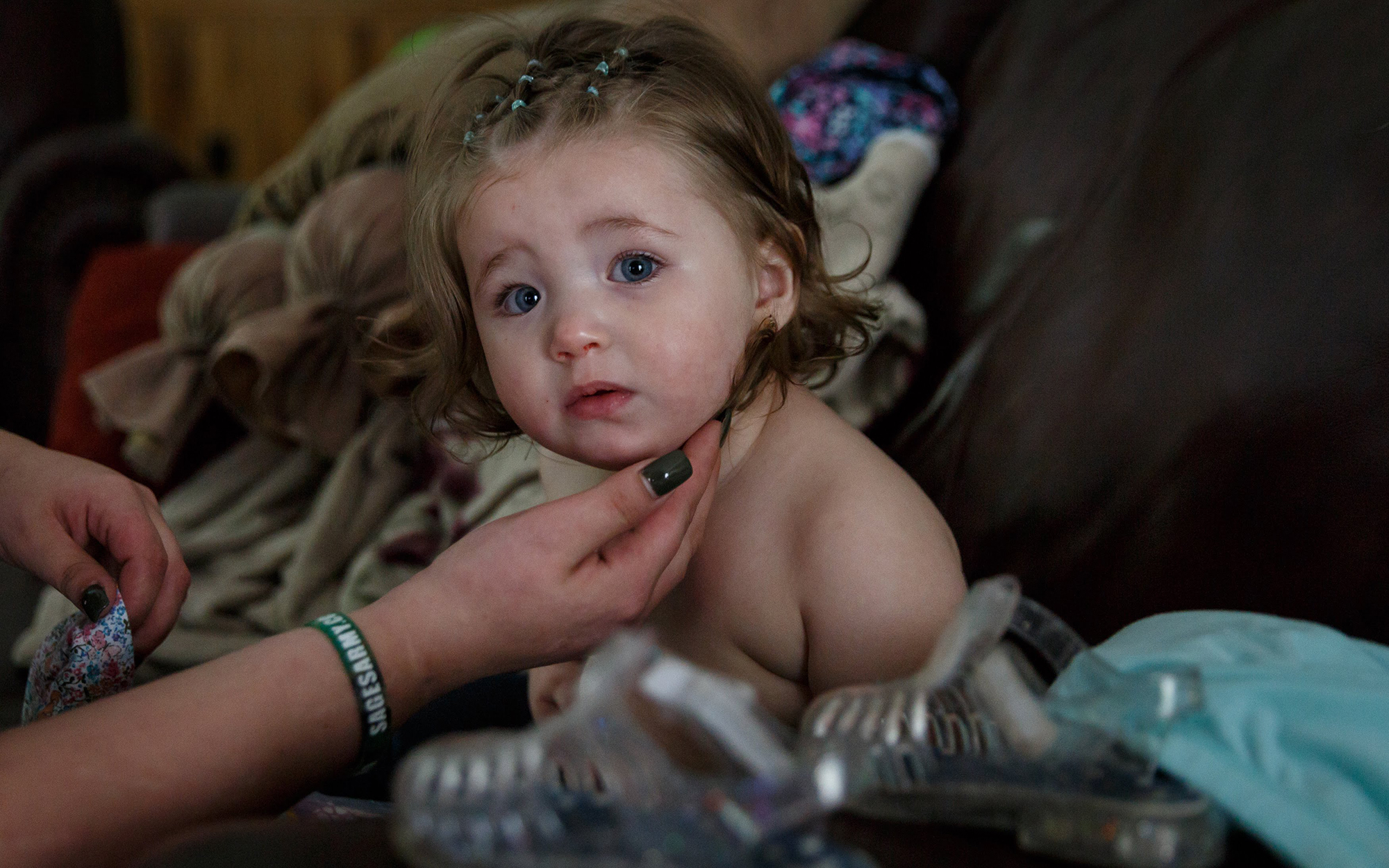 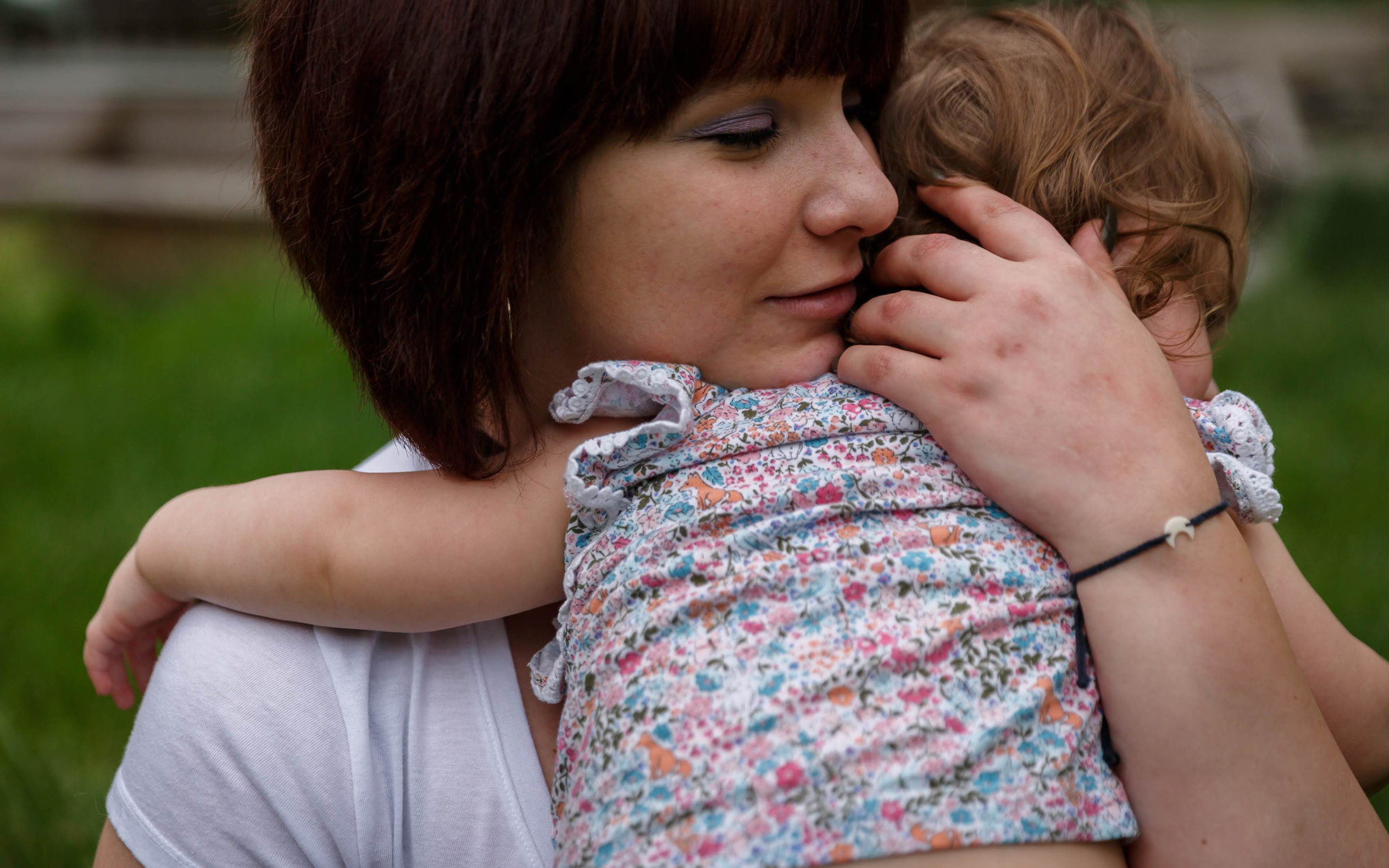 Bree Swarmer says she would like to see other new mothers feel more comfortable with reaching out for help to care for their babies with neonatal abstinence syndrome. (Photo by Maranie Rae Staab/PublicSource)

She considers her clean date Jan. 25, 2016, when she went on methadone for the last time. It was July 2016 when she found out she was pregnant. Methadone, when used as prescribed, can help reduce dependence on opioids.

Her daughter, Brinlee, was born in January 2017. Brinlee had to stay in the care of Magee-Womens Hospital of UPMC for about three weeks because she was experiencing withdrawal from the methadone.

The American College of Obstetricians and Gynecologists recommends medication-assisted treatment — such as methadone — for pregnant women with opioid use disorders. Withdrawal during pregnancy could lead to miscarriage, and neonatal abstinence syndrome [NAS] is “both expected and treatable,” according to the group.

Neonatal abstinence syndrome is a drug-withdrawal syndrome that is evident in primarily opioid-exposed infants, shortly after birth, according to the Centers for Disease Control and Prevention.

Babies identified with neonatal abstinence syndrome often must stay in hospitals longer — 17.1 days on average compared to 3.5 days for all other newborn stays, according to fiscal year 2017 data collected by the Pennsylvania Health Care Cost Containment Council.

Swarmer said she was there every day, holding her, feeding her and talking to her.

When Brinlee did get to go home, she cried for what seemed like hours at a time. “At times, she was inconsolable,” Swarmer said.

The first-time mom said her daughter fortunately did not have other symptoms of NAS that some infants suffer, such as diarrhea, tremors, excessive yawning, stuffy nose, sneezing and feeding problems.

Brinlee’s long crying stretches dissipated when she was about six months old. But knowing the stress that caused and all the other potential NAS symptoms, Swarmer said she hopes other parents will be more open to seeking help. 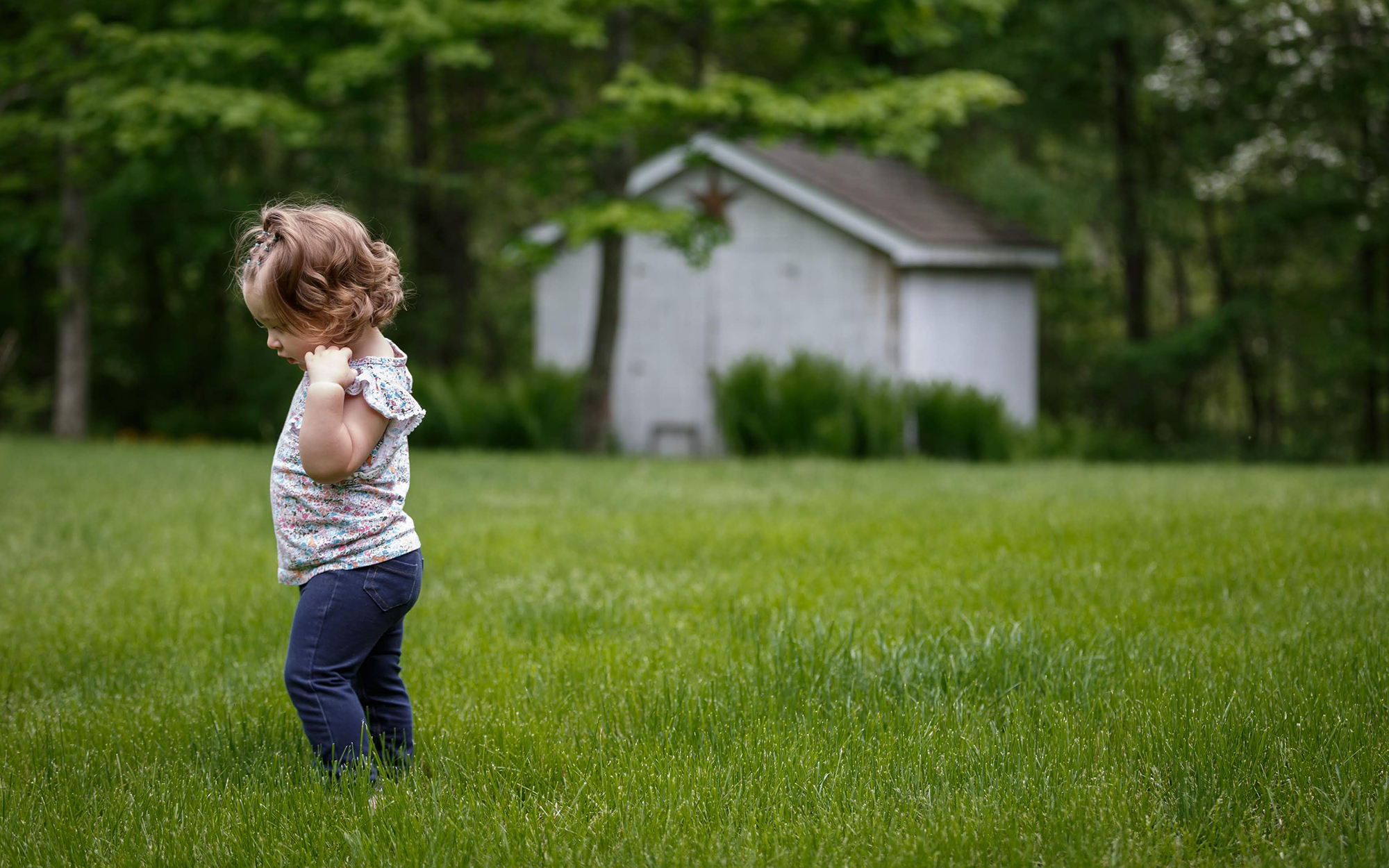 Bree Swarmer’s daughter, Brinlee, was born in withdrawal to the methadone her mother was taking during pregnancy. (Photo by Maranie Rae Staab/PublicSource)

“Many moms don’t reach out,” she said. “You are scared to change.”

Swarmer talks openly about her experience with addiction and motherhood to groups for Sage’s Army, a nonprofit advocacy group in Westmoreland County. She is considering going after the recovery specialist certification to help others.

Today, she she said she attends counseling through Faith Forward Community Care Center in Westmoreland County.

Read about Pennsylvania’s progress on protecting infants exposed to drugs.

“I know there is a reason I am not dead. I know there is a greater purpose for me. That's why I go and I talk to people,” she said. “I was a horrible junkie. I was ruthless.” For a time when she was in active addiction, Swarmer said she was prostituting herself and jumping from the homes of friends and family to hotels.

Carmen Capozzi, of Irwin, founded Sage’s Army in 2012 after his son died of a heroin overdose. He calls Swarmer one of “the strongest people I’ve ever met.” 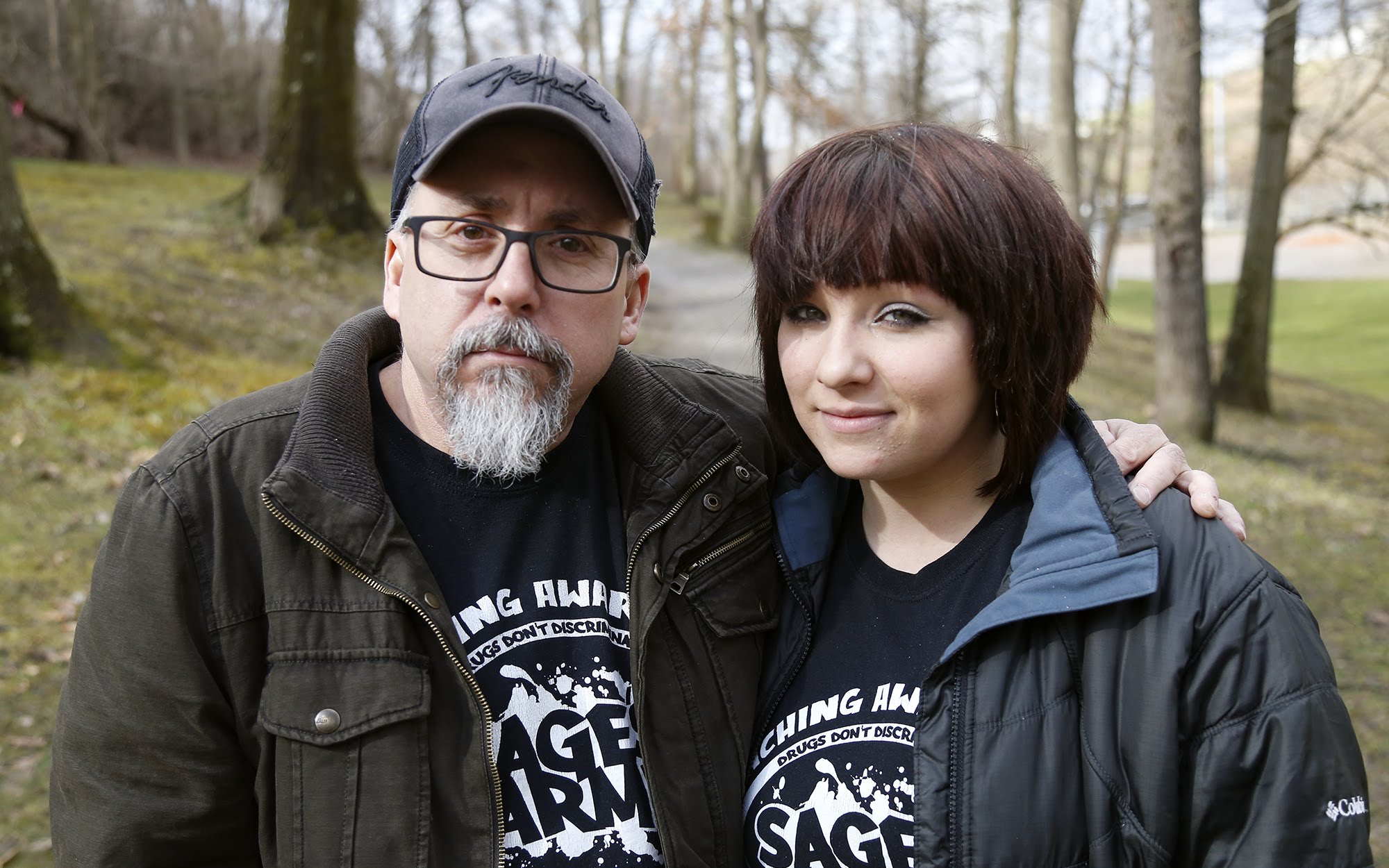 Swarmer’s daughter turned 16 months on May 19. She’s a happy curly haired toddler who points out her ears and belly button, started trying to walk at around 1 and “says a ton of words,” Swarmer said.

Like any parent, Swarmer worries: Brinlee “is a biter and sometimes bangs her head when she doesn’t get her way.”

Swarmer said she’s committed to doing whatever she has to do to keep her daughter healthy and safe. And, most of all, that means staying clean.

Kimberly Palmiero is a journalist based in Pittsburgh. She can be reached at kimpalmiero@gmail.com.

This story was fact-checked by Abigail Lind. 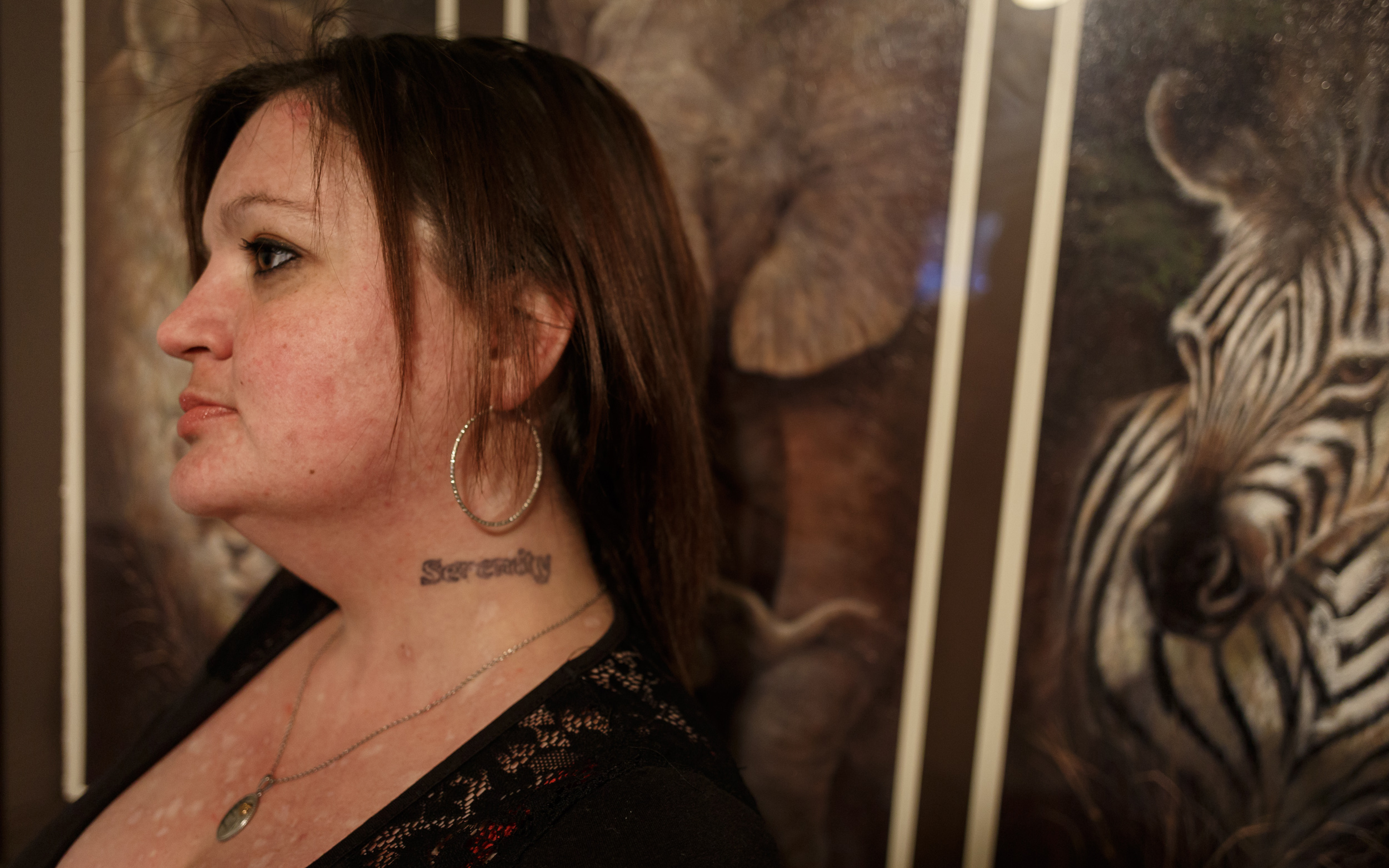 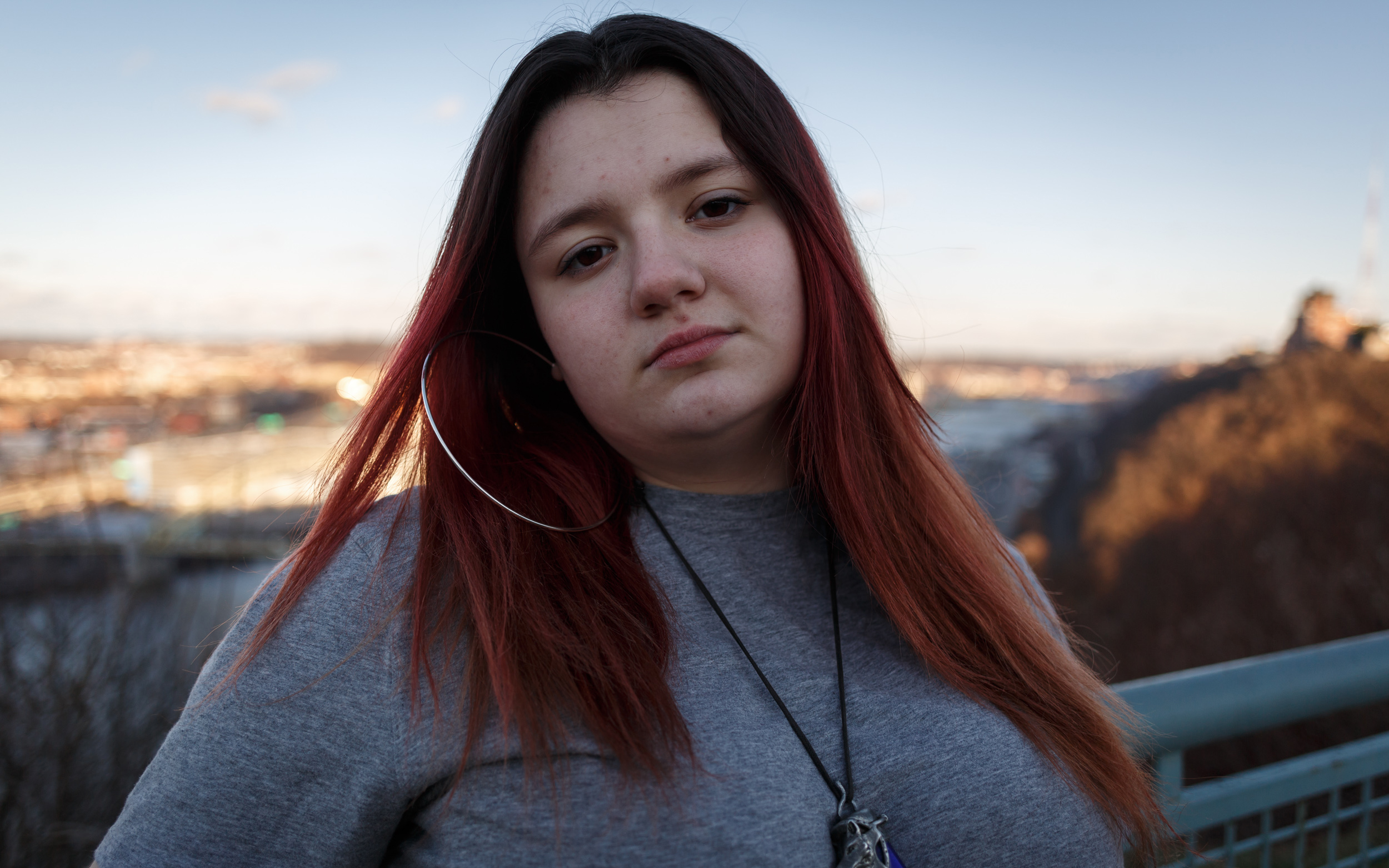