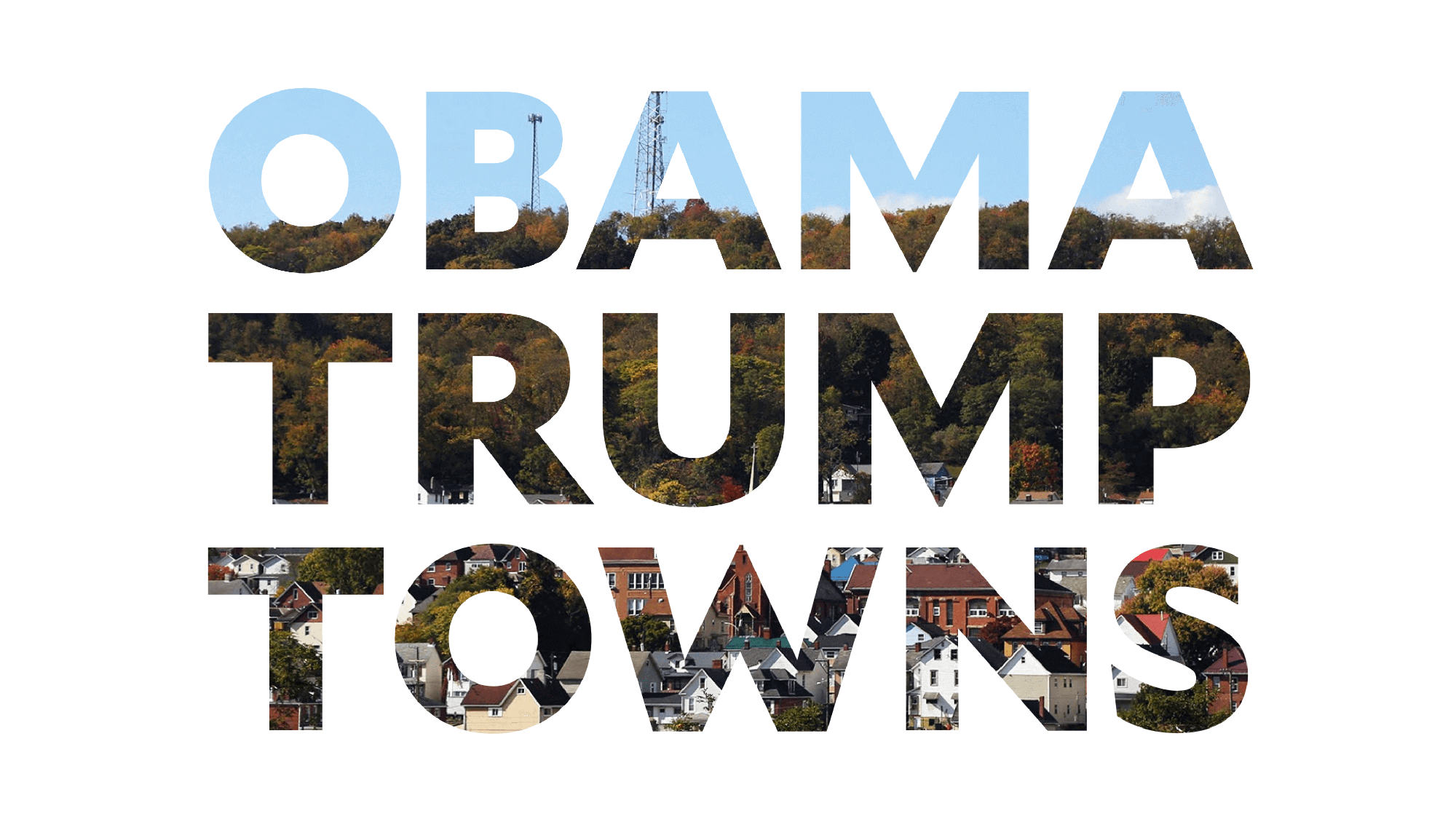 Tarentum, Oakdale and Glassport are among the Allegheny County towns that voted for Barack Obama in 2012 and Donald Trump in 2016. With all eyes on the battleground state of Pennsylvania, families are divided, and there's anxiety in the Main Street air.

Catching a quick smoke outside of the American Legion hall in Glassport, Rich Bradley gestured down Monongahela Avenue and said that he’s far from the only one to break with the political party that’s led, locally, by his mom.

“If you ride down the street, there’s a lot of Democrats with Trump signs in their yards,” said Bradley, 48, a plumber. Why? “Tired of the bullshit,” he said. Which bullshit? “The same old last-40-year bullshit, you know what I mean?” 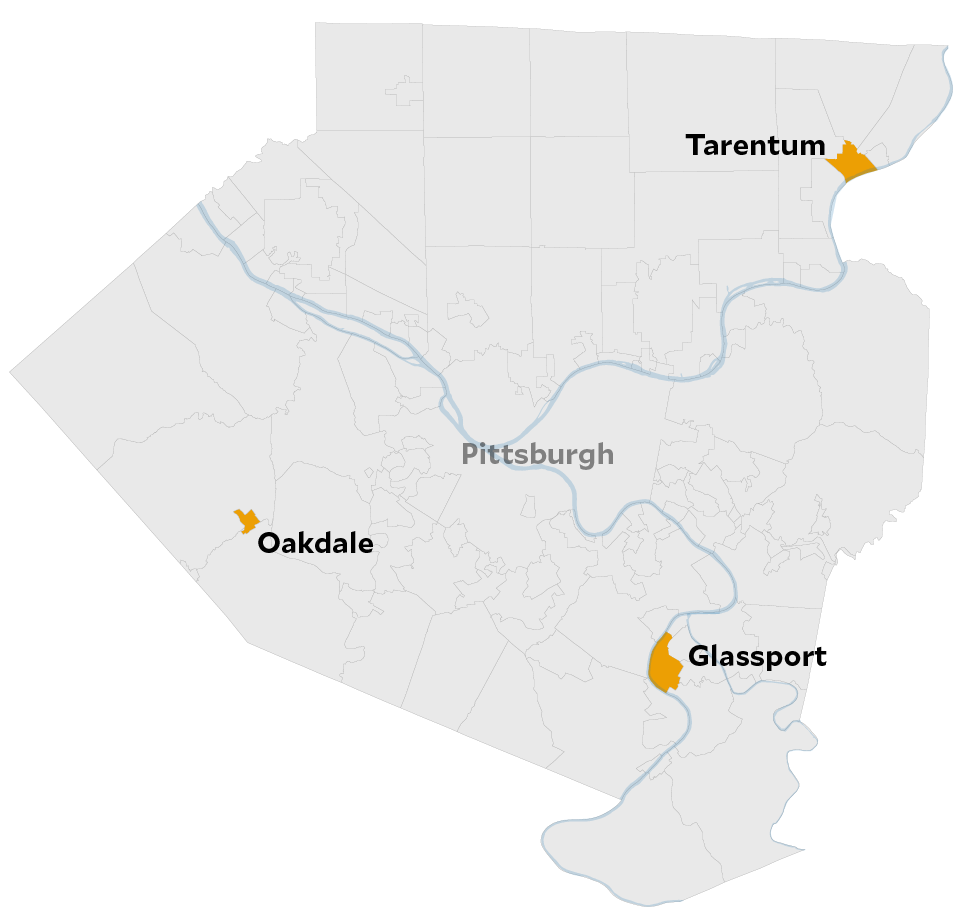 Bradley’s 40 years of bullshit roughly match the closure, in 1983, of the last fixture of Glassport’s industrial heyday: the Copperweld factory that made aluminum-clad wire.

Now? “Well, we have three dollar stores and no grocery store,” Bradley complained. “And then we’re going to have three places to buy beer, a liquor store, a beer distributor. … No 24-hour gas station.”

His mother, former Glassport Mayor Rosemary Bradley, chairs the borough’s Democratic committee and has made some 250 phone calls in support of Joe Biden. She hasn’t won over her son, nor the household across the street, which has a large Trump sign in the yard. That, she said, is her sister-in-law’s house. 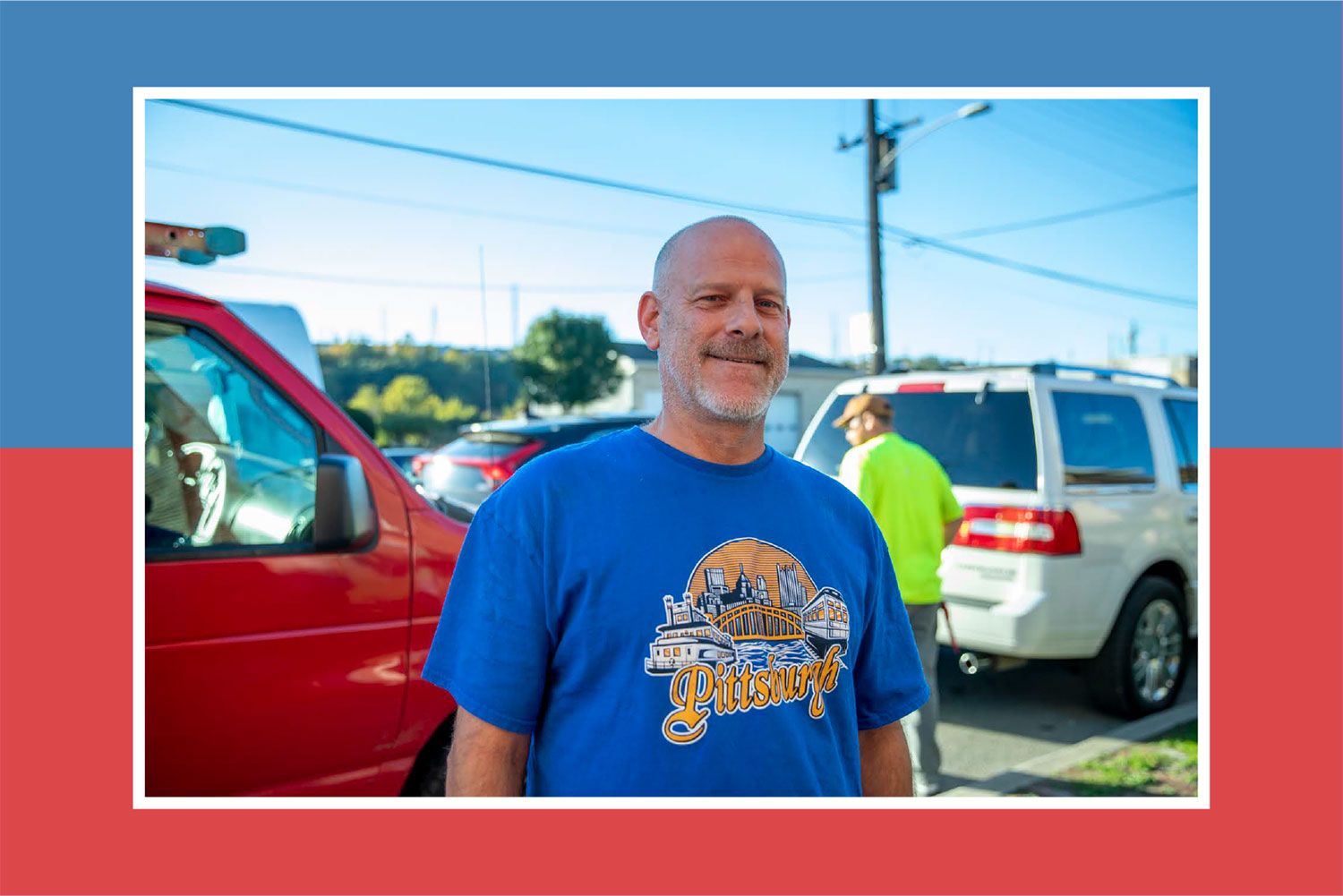 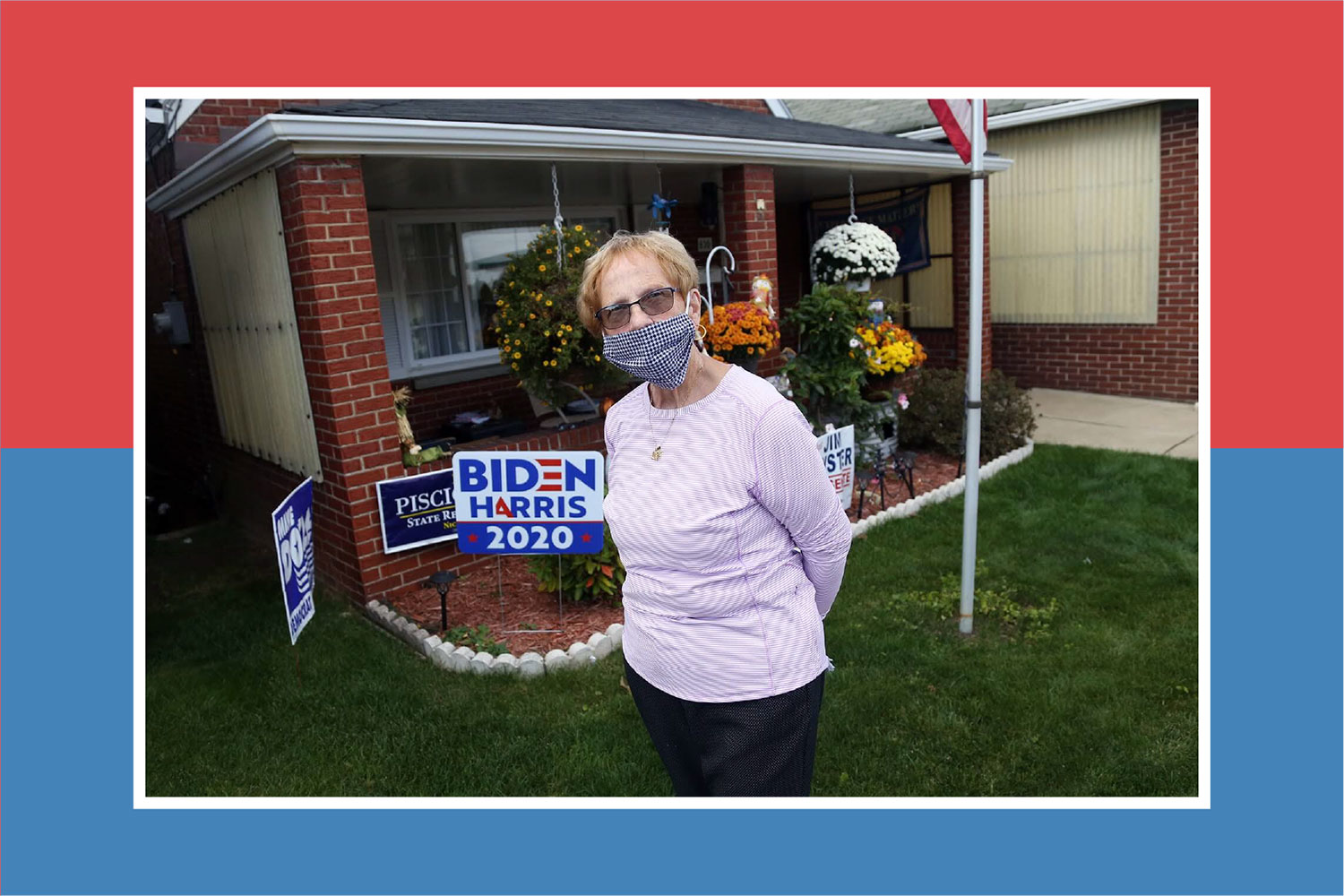 Rich Bradley, left, stands on Monongahela Avenue in Glassport, telling anyone who will listen that he's backing Trump. His mother, Rosemary Bradley, right, chairs Glassport's Democratic Committee, and has made hundreds of calls in support of Biden.
(Photos by Jay Manning and Ryan Loew/PublicSource)

Rich Bradley, top, stands on Monongahela Avenue in Glassport, telling anyone who will listen that he's backing Trump. His mother, Rosemary Bradley, bottom, chairs Glassport's Democratic Committee, and has made hundreds of calls in support of Biden.
(Photos by Jay Manning and Ryan Loew/PublicSource)

The Bradley family’s divisions are reflected throughout this Mon Valley borough, and across other Allegheny County towns, where Trump flags wave near Biden signs in areas once known as Democratic strongholds. Some towns are openly divided. In others, residents are apprehensive about saying who will receive their vote.

PublicSource reporters visited three communities — Tarentum, Oakdale and Glassport — that voted for Democrat Barack Obama in 2012 and Republican Donald Trump in 2016. Such swings, replicated in many other communities statewide, helped deliver the Electoral College to Trump.

Of course, we asked: Trump or Biden? But we also explored a deeper question: Four years after your town helped to change the course of history, how do you feel about the community, the country and the future?

“If you go by the signs – three-to-one, possibly four-to-one – Trump to Biden,” said the 57-year-old Maximovich, who voted for Obama in 2012 and then Trump four years later.

Lewis Mumford, an urban historian and sociologist, wrote in 1937 that “the city creates drama; the suburb lacks it.” Fast-forward to the 2020 presidential election, and Oakdale residents might be inclined to disagree.

Affectionately called “America’s Hometown,” this community of roughly 1,500 people is older, with lower prevalence of college degrees, than Allegheny County as a whole, which went for the Democrats in recent presidential elections.

3 communities that helped to change history

While Halloween decorations dot Oakdale more than red or blue political signs, the yards that do get political rival any holiday competition.

The tiny patch of grass in his front yard hosts five political signs. The porch has a Trump banner and the door a life-size cutout of the former reality TV star giving two thumbs up. His yard is surpassed only by a neighbor’s, which has the 45th president’s name emblazoned in red, white and blue paint that McGuane helped to brush. 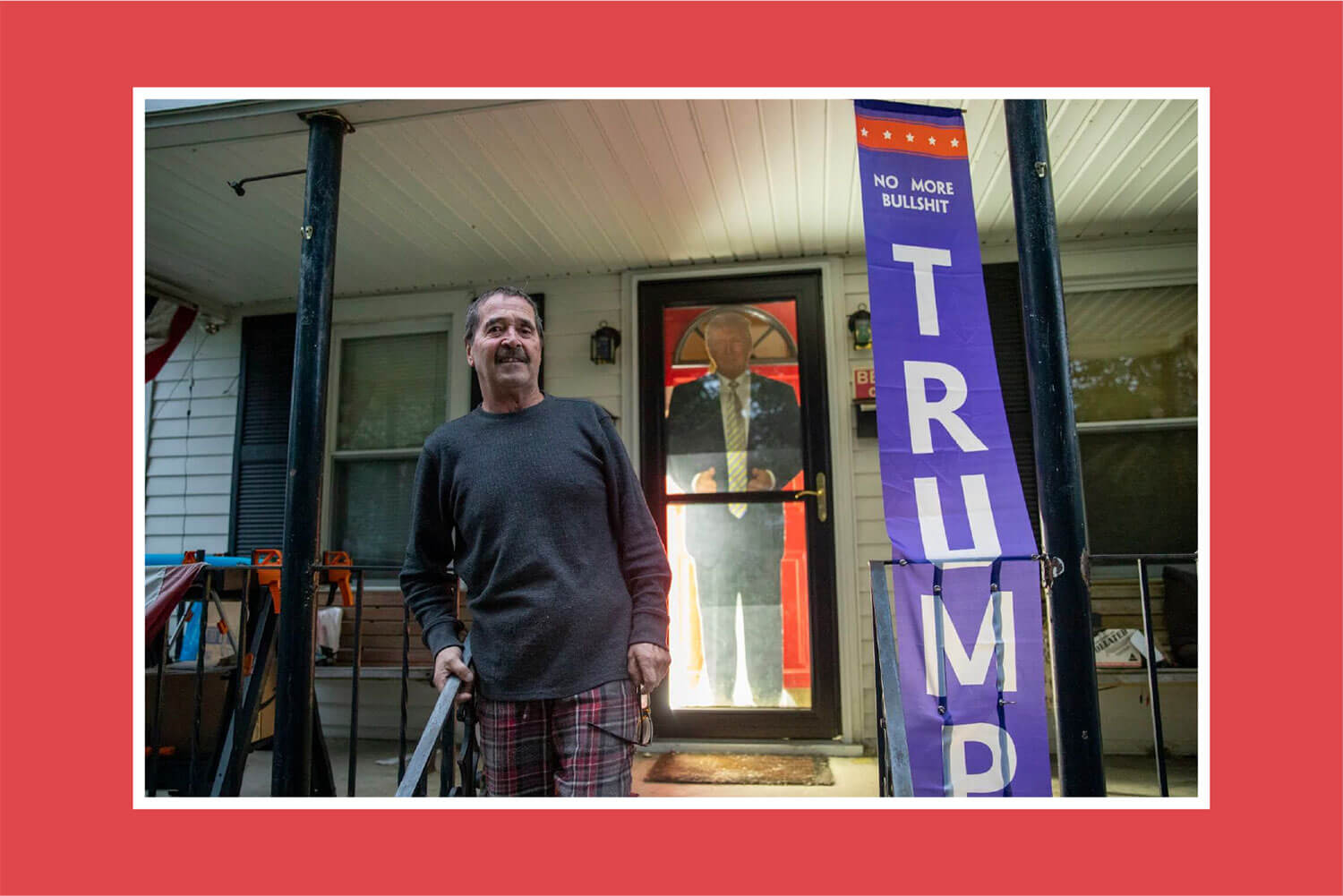 “The hate for Trump, it’s gotten so bad,” said McGuane, who is Maximovich’s second cousin. “I lost all respect for the word ‘Democrat.’”

He, too, switched affiliations, believing the Democratic Party had changed.

If Maximovich and McGuane see clues in the yard signs, others aren’t as quick to equate the number of placards with the eventual winner of Pennsylvania’s delegates. 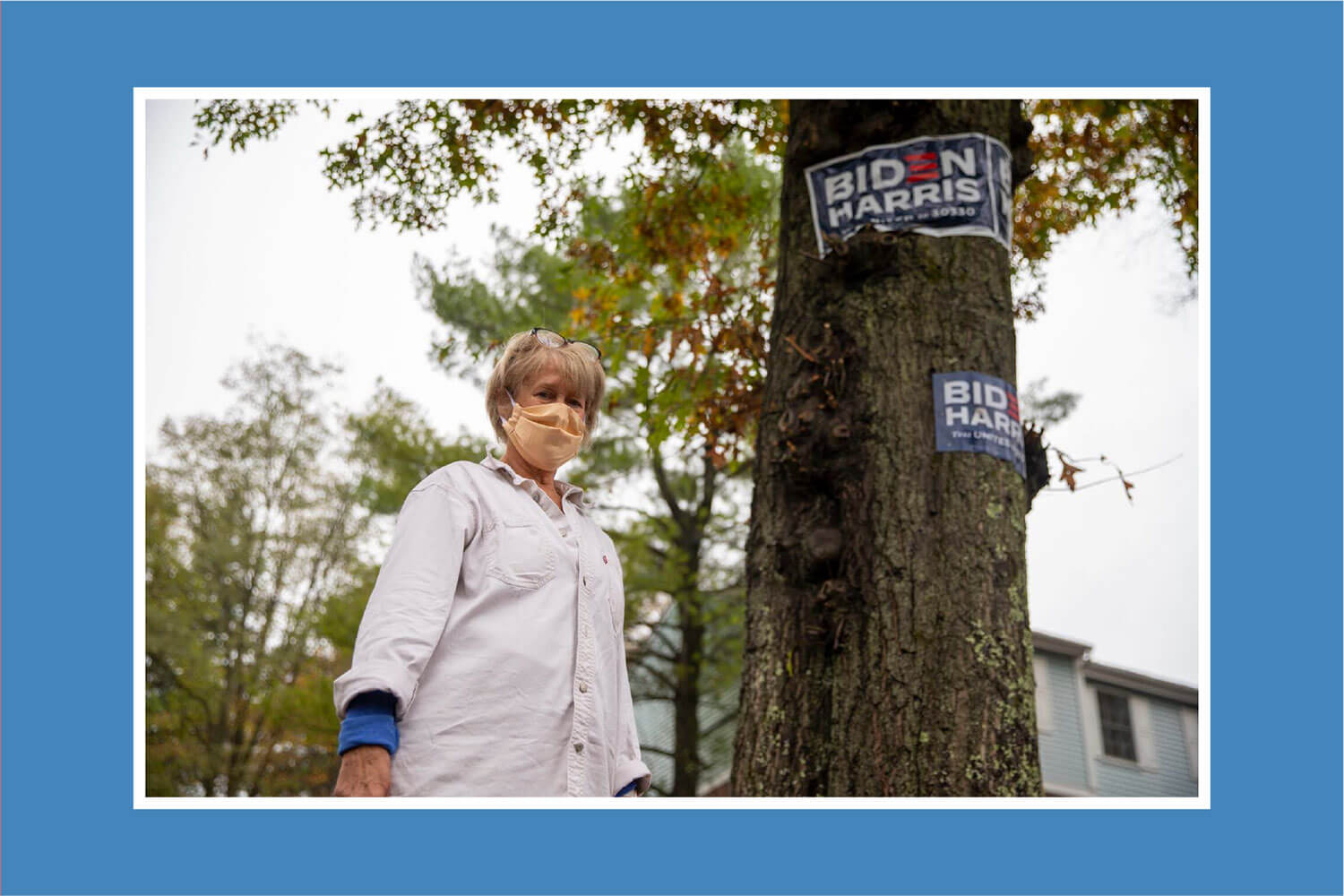 Nancy Beaumont put out a Biden campaign sign, which was stolen days later. Her husband stapled another yard sign 10 feet up a tree trunk.
(Photo by Jay Manning/PublicSource)

A FedEx retiree, Beaumont is related by marriage to Maximovich and McGuane. Formerly a registered Republican — though she voted for Hillary Clinton in 2016 — Beaumont put out a Biden campaign sign only to have it swiped a couple of days later. So, her husband pulled out a ladder and stapled the yard sign to a tree trunk, roughly 10 feet off the ground.

“What we’re probably doing is just agitating each other with the signs,” said Beaumont, noting the neighbor across the street, whose yard has a Trump sign, helped her husband with the ladder.

While Maximovich and McGuane talked about the “defund police” movement and a perceived move toward socialism, Beaumont spoke of morality and healing. But they all agreed the environment was untenable.

“It’s all been so toxic,” Beaumont said. “We’re all going to have to figure out how to live with each other when it’s over.”

Carrie Fox’s mind has been made up for some time. “I’ve known who I’m going to vote for,” said Fox, 56, the sole at-large council member for Tarentum Borough. But even though she’s one of the town’s most prominent elected Democrats, she wouldn’t divulge her presidential pick for this story. “I’ve always been a believer in that you just follow your beliefs and you vote for who you believe in and what that candidate is believing in.”

While concerts and fairs have been canceled, the town in early October was the site of a Trump parade that drew hundreds of cars, according to a resident who didn’t want to be identified. But in the close-knit borough of about 4,400 residents, which sits atop the Allegheny River, political signs are sparse.

Pumpkin displays, Halloween ghost decorations and American flags outweigh political signage, though signs supporting Trump are more numerous than signs for Biden. Some residents had several in their yard, hanging on the porch, and propped in front windows. In a few front yards, Biden and Trump signs went head-to-head, planted just feet apart. 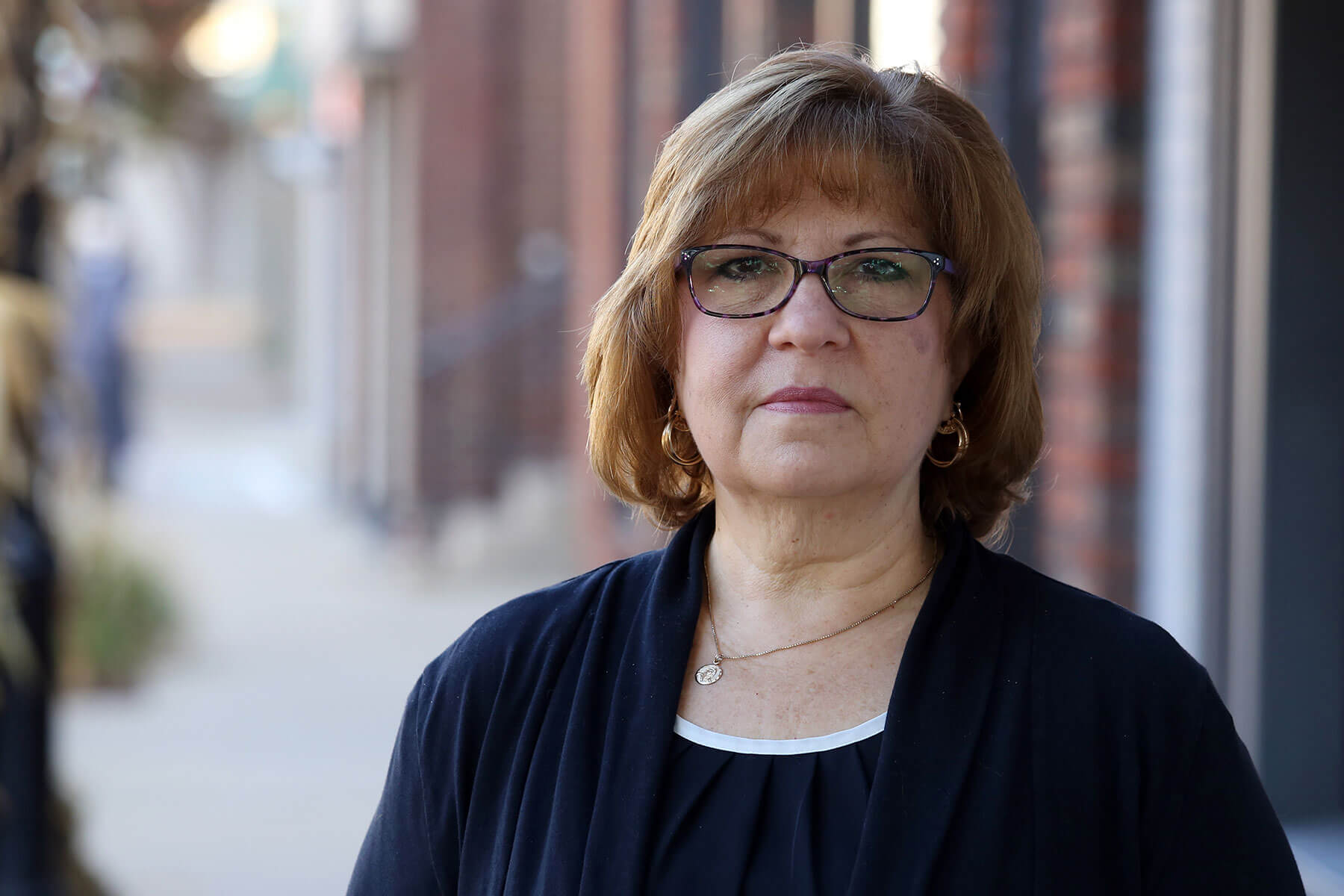 But when a PublicSource reporter visited the borough for a day, nearly a dozen people declined to go on record. When Fox was asked what she makes of that, she paused.

Unlike Oakdale, Tarentum skews younger, but poorer, than the county as a whole, with a 23% poverty rate. While it is roughly as racially diverse as the county, it lags in the prevalence of foreign-born residents and in education levels.

Fox thinks many people in Tarentum will consider the same issues and topics driving her own voting decisions: healthcare, the economy and how the COVID-19 pandemic is being handled.

So why won’t they talk about that? “I think you have your share of very scared people.” 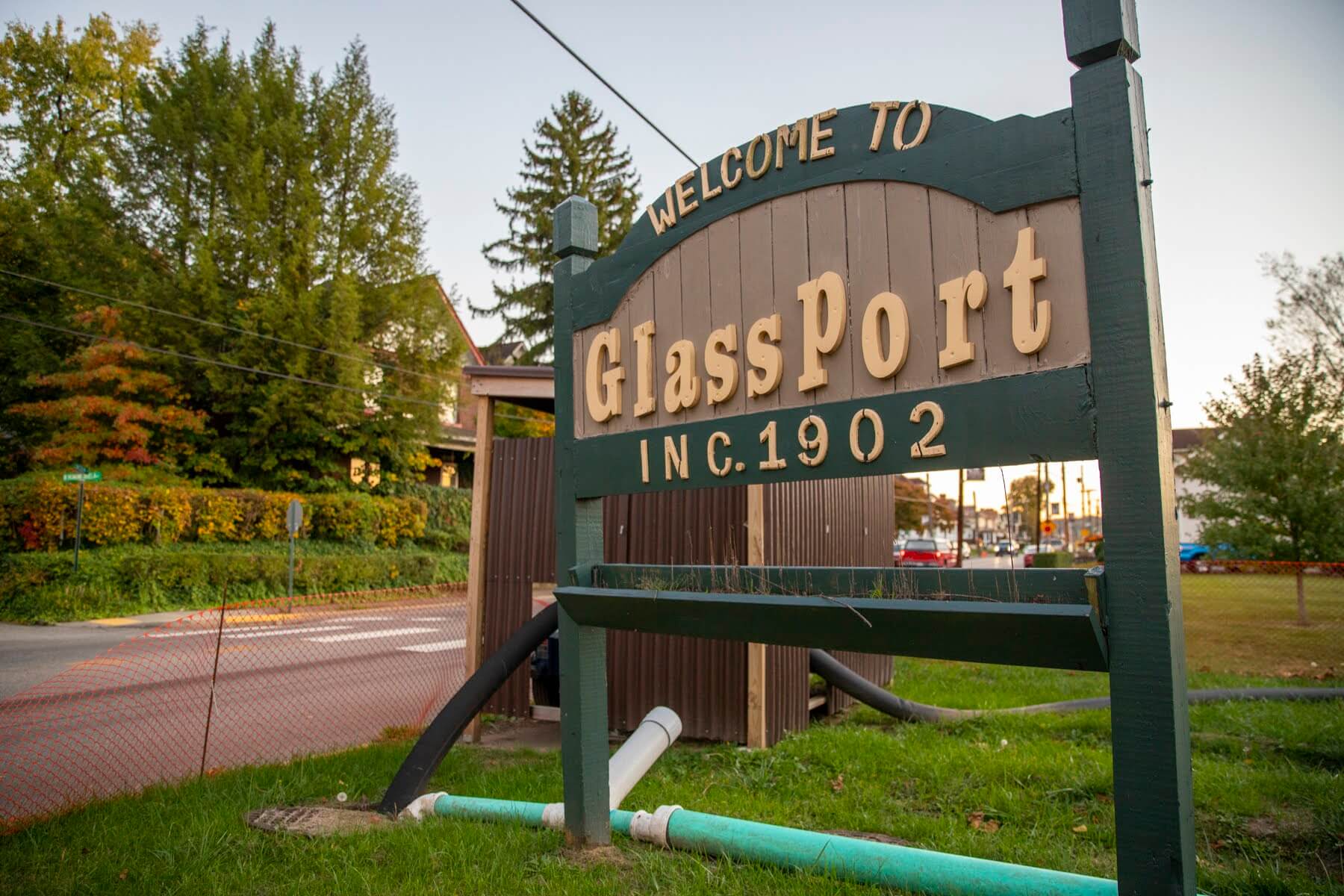 “I think it’s Lucifer against Lucifer if you ask me,” said Shadawn Reeves, shortly after leaving the Family Dollar store in Glassport, where she has lived for a year.

The 33-year-old, whose job involves supporting mentally challenged adults, said Trump is “full of shit.” But Biden “was the one signing off on some of them laws that we didn’t like,” she added, an apparent reference to the former senator’s legislative record, which has drawn some criticism from criminal justice reformers. 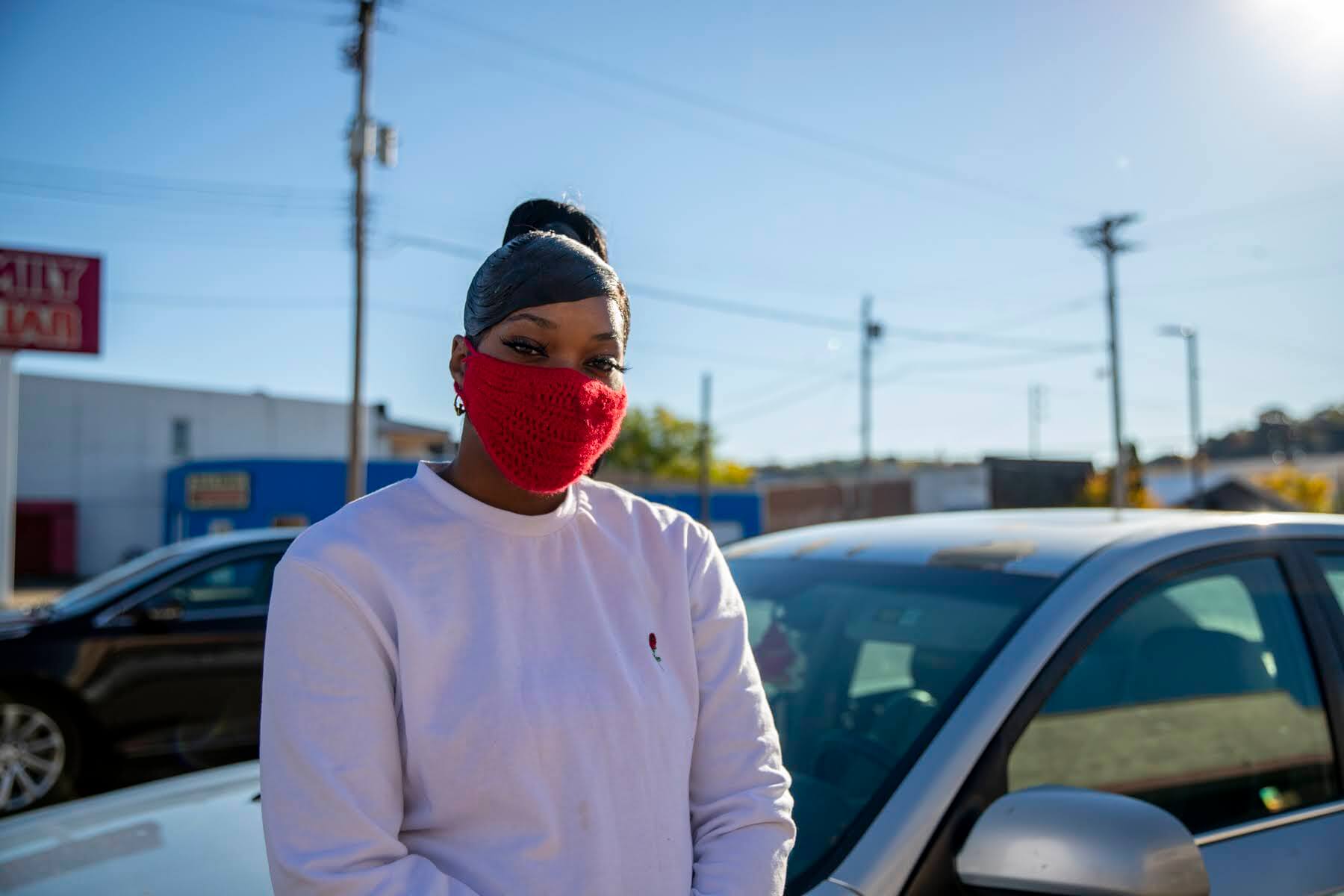 Shadawn Reeves, a Glassport resident and mother, said she believes that we're voting for the lesser of two evils.
(Photo by Jay Manning/PublicSource)

She moved to Glassport because it’s quiet and sits in the South Allegheny School District, which she views as a good place for her two children. But does the community she’s chosen for her children have a vibrant future? “I don’t see none because there’s really nothing over here,” she said. The borough’s vibe is “real down. You come over here, it’s like, uhhhhhh.”

That perception would rankle Rosemary Bradley, who loves to show off the improvements Glassport made when she served as mayor from 2014 through 2017. There’s the spacious, new police station, for instance, and the 55-unit senior apartments that now occupy former Glassport Central Elementary School. But on the way from the station to the senior units, she passed one of those signs, too big to ignore: “Trump 2020: No More Bullshit.”

“But whose bullshit? His, or somebody else’s?” she asked, obviously uncomfortable swearing. Such signs are “irresponsible, not professional,” the 78-year-old retired government administrator continued. “If the old people see that sign, that’s probably what scares them.”

The conversations Bradley had while calling an estimated 250 local Democrats suggest to her that most residents are less worried about “bullshit” than about real issues: jobs, healthcare and the pandemic.

Not your average Allegheny towns

Glassport, Oakdale and Tarentum differ from the county as a whole in terms of education, home values and foreign-born status.

The man who beat her in the 2017 Democratic mayoral primary, by eight votes, is Keith DiMarco, 48, a communications field technician. His uncle and father ran as Democrats and served as mayors.

When DiMarco decided to take up the family avocation and run for borough council, he considered changing his registration to Republican, because, he said, “at the time, it seemed like I agreed more with Republican than I did with Democrat.” But family members told him: “You’ve got to be a Democrat in Glassport to win.”

He heeded that advice, but it’s no longer true. An independent holds one of the seven seats on council, with Democrats in the rest. And some of the borough’s political players say partisan sentiment in the borough is nearly balanced — but not comfortably.

“I think people are really frightened with this election, one way or the other,” said DiMarco. “Whatever side you’re on, you’re really afraid if the other side wins. I don’t know if that’s the way it should be.”

Jim Rocco, an unemployed construction worker, was the rare exception to the apocalyptic mood. His cap gave away his preference, but he hadn’t voted yet. 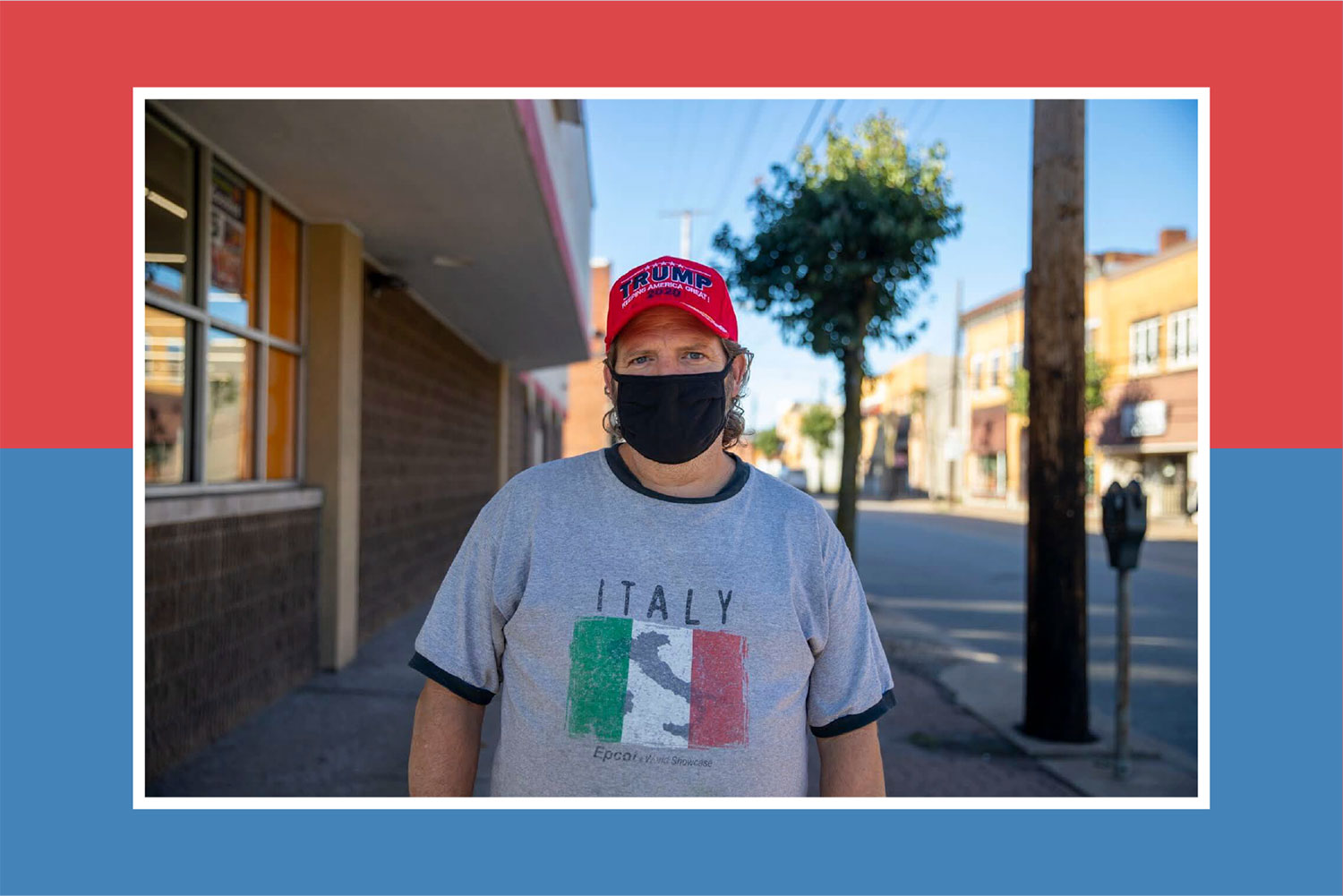 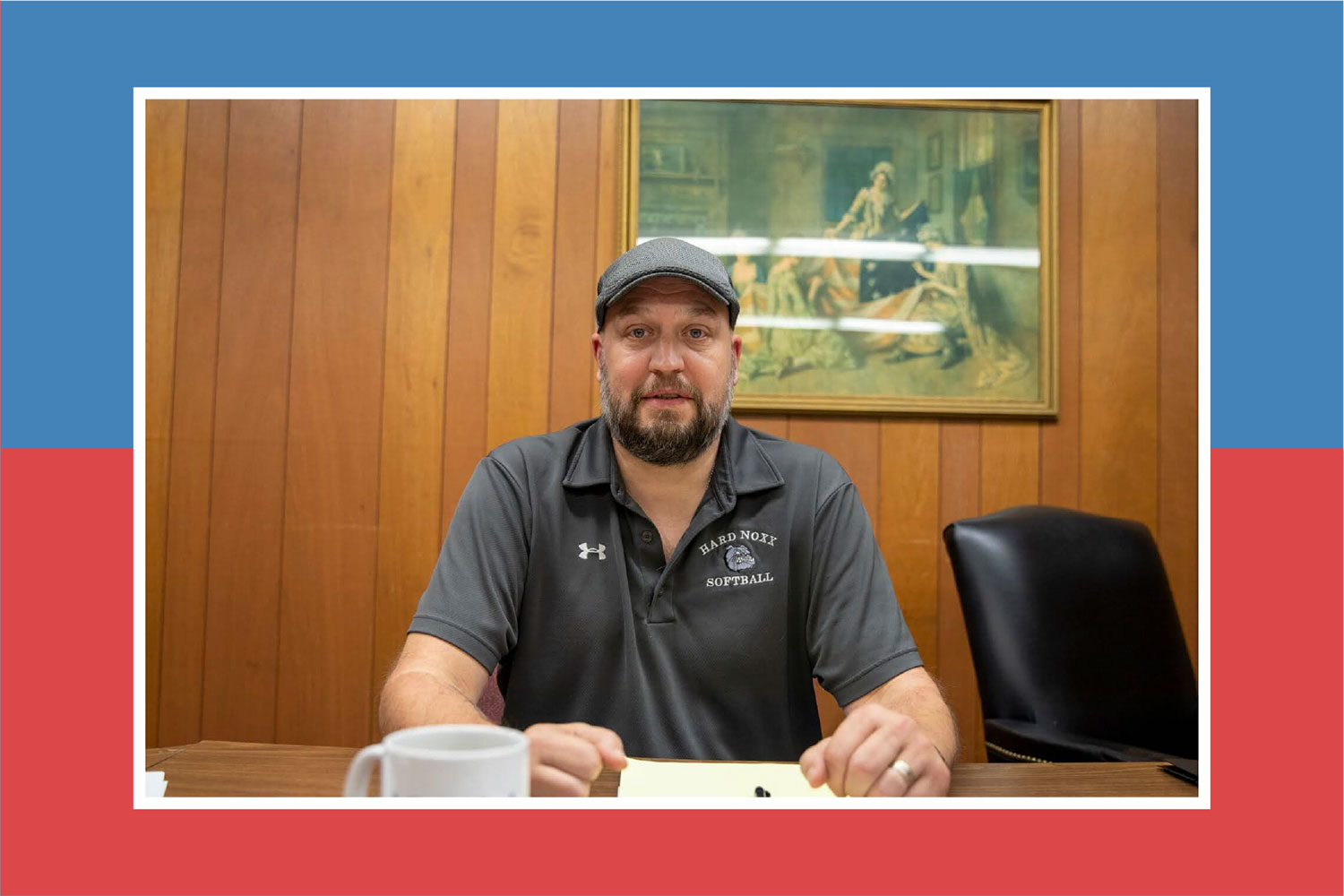 Jim Rocco, left, wears the red hat but has doubts when Trump "puts his foot in his mouth." Glassport Mayor Keith DiMarco, right, flirted with the G.O.P., but ran as a Democrat.
(Photos by Jay Manning/PublicSource)

Jim Rocco, top, wears the red hat but has doubts when Trump "puts his foot in his mouth." Glassport Mayor Keith DiMarco, bottom, flirted with the G.O.P., but ran as a Democrat.
(Photos by Jay Manning/PublicSource)

He’s with “Donald Trump, at this point,” he said. But? “The more [Trump] puts his foot in his mouth, the more I don’t know.”

The 51-year-old father of two school-aged children has lived the last 34 years in the borough. “It’s an awesome community. It’s a close-knit town,” he said.

Will his kids find a future here? “Well, you know, with the economy going the way it is, it’s hard to say that,” he said. It depends on the survival of the mills across the Monongahela River from the town, he said. “So I would hope so.”

Does the future hang on the election? He answered by telling of a woman who took a shine to his son, and who has been bringing over weekly groceries since he lost his job. “We’ll survive it, because we’ve got people like that.”

Rich Lord is PublicSource’s economic development reporter. He can be reached at rich@publicsource.org or on Twitter @richelord.

Nicole C. Brambila is the local government reporter for PublicSource. She can be reached at 412-515-0072 or nicole@publicsource.org.

TyLisa C. Johnson covers education for PublicSource. She can be reached at tylisa@publicsource.org.