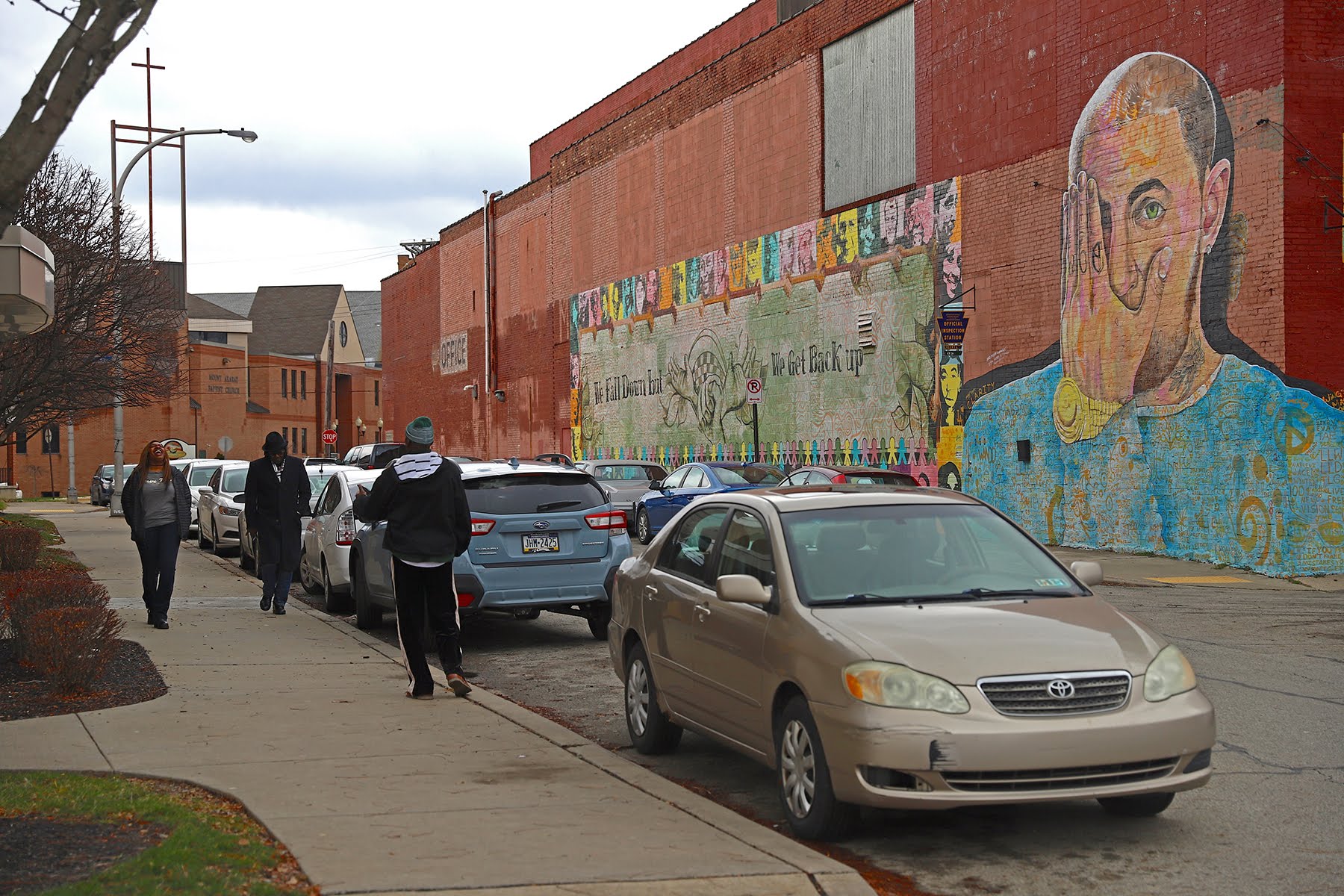 A group of people gathers outside the Kingsley Association community center in Pittsburgh's Larimer neighborhood. (Photo by Jay Manning/PublicSource)

A group of people gathers outside the Kingsley Association community center in Pittsburgh's Larimer neighborhood. (Photo by Jay Manning/PublicSource)

How the neighborhood you grow up in affects your future

Research reveals that Pittsburgh children who grew up just blocks away from one another have had very different life outcomes in income, employment and incarceration, among other results.

Stories about how opportunity or lack thereof may affect the future of Pittsburgh youth.

Where children live determines their chances of success as adults. That’s the conclusion that Harvard researcher Raj Chetty and colleagues came to after culling more than two decades’ worth of U.S. Census and Internal Revenue Service data.

Researchers found that children’s immediate neighborhood area has significant effects on life outcomes, and those outcomes can differ considerably compared to those experienced by children just streets away. In fact, their study claims that a child’s neighborhood has a greater effect on future income earnings than the neighborhood they end up living in as an adult.

The Opportunity Atlas draws from a sample of 20.5 million Americans born between 1978 to 1983 who are now in their late-thirties*. This data remains relevant for children growing up today, the researchers say, because “neighborhood conditions are relatively stable over time.”

David Williams is policy director at Opportunity Insights, the Harvard institute that hosts The Opportunity Atlas. “The research points to the fact that neighborhoods really matter,” he said, “and they are especially important for low-income families and their children.” He emphasized that the data reveals the effect that housing affordability can have on these outcomes, and “how it creates or doesn’t create access for families to different types of neighborhoods.”

In Pittsburgh, a city with neighborhoods heavily segregated by race and class, these findings reveal that children’s life outcomes vary broadly from children growing up just blocks away. 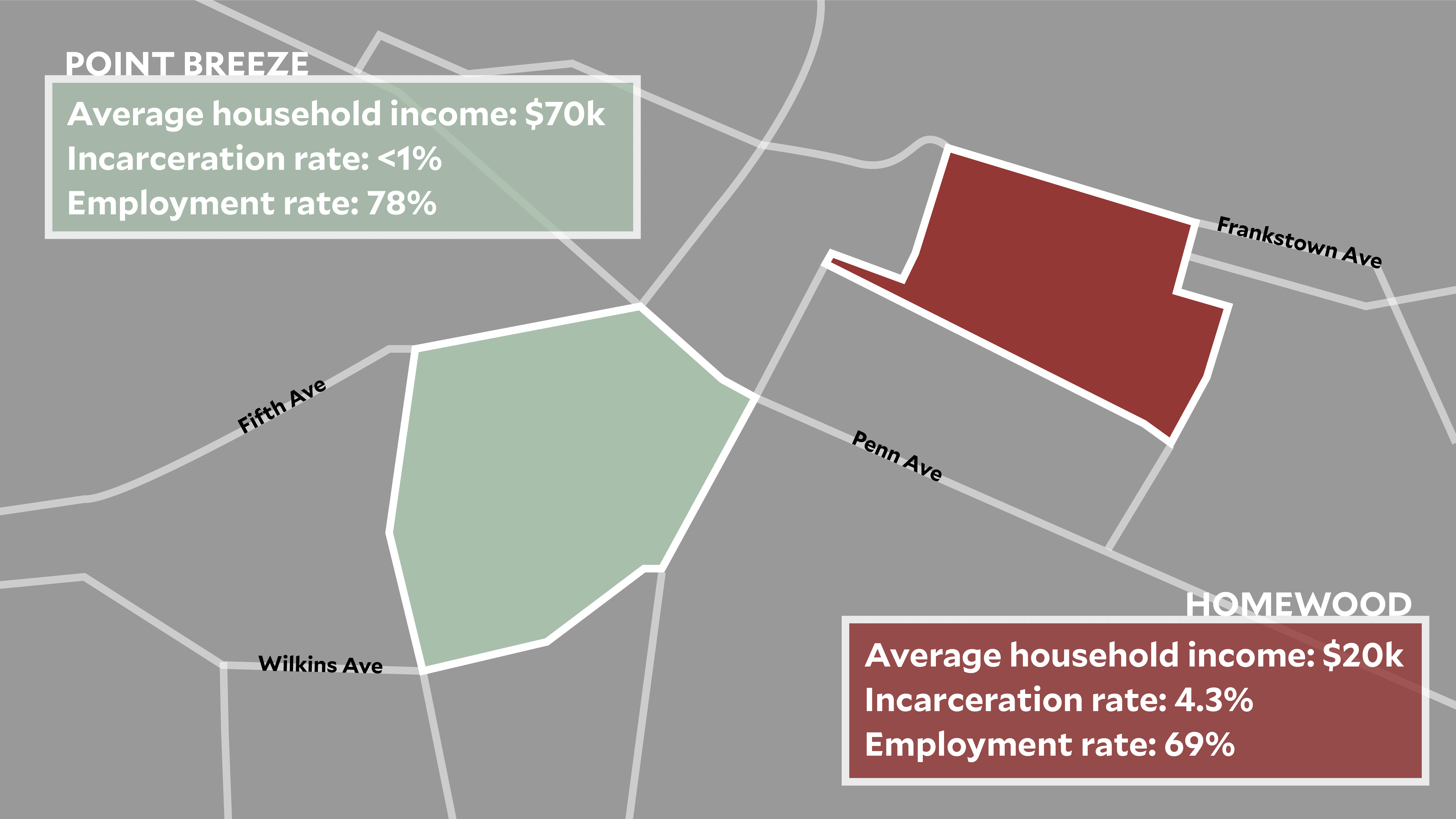 Put another way, children born about 40 years ago in the Larimer tract are now adults earning less than half of what adults from the Shadyside tract now earn, on average. And the Larimer group was more than six times as likely to have been incarcerated. 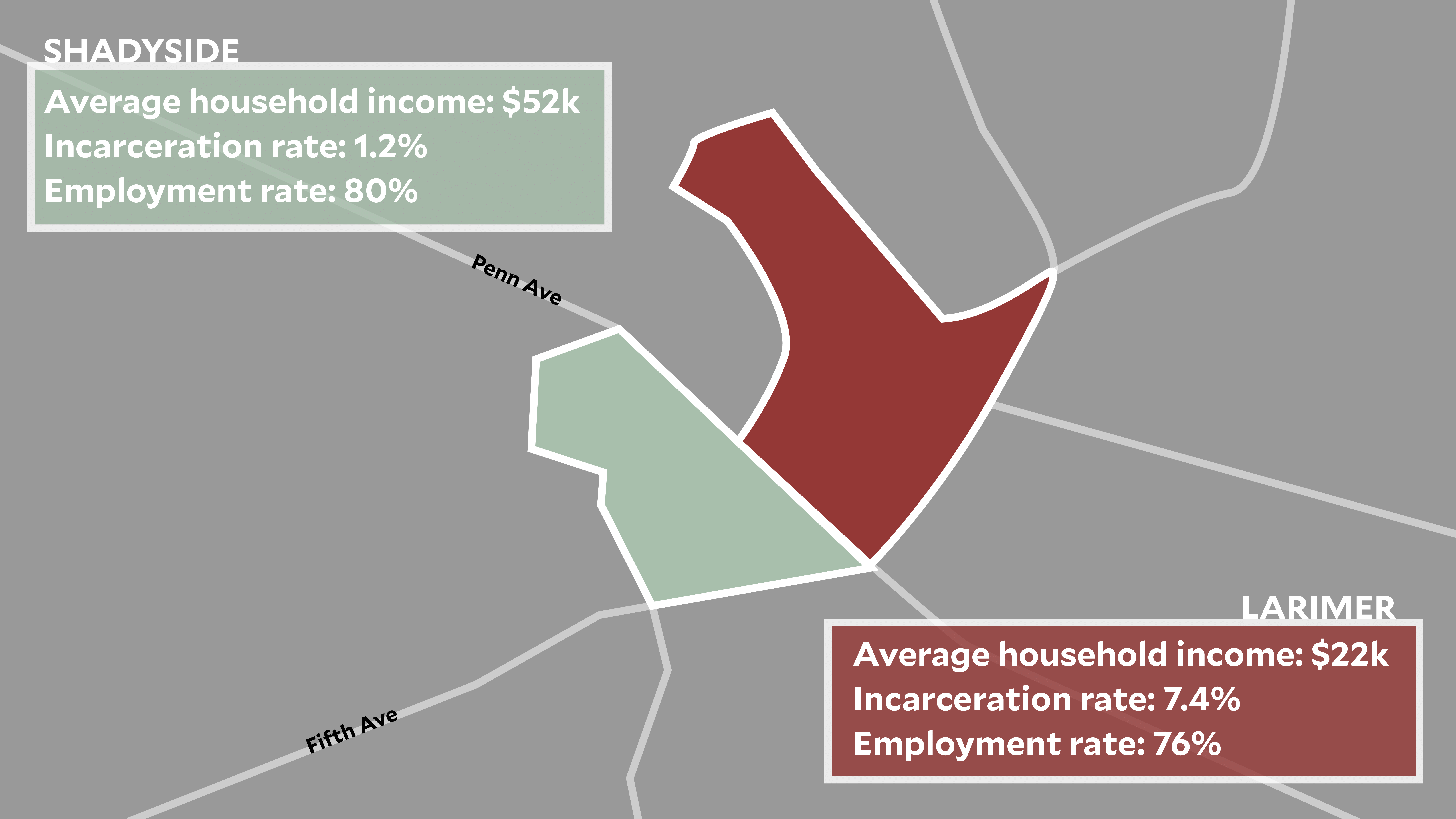 Chetty and his colleagues wrote that these findings remain important for children currently living in each of these four sample neighborhoods because these conditions seem to carry over from one generation to the next.

John Wallace Jr. is pastor of Homewood Bible Church and professor of sociology at the University of Pittsburgh, as well as co-founder and board president of Homewood Children’s Village. “The context in which children grow up,” he said, “has huge implications for their psychological, financial and other metrics of well-being.”

While Wallace acknowledges that a complex set of factors affects life outcomes, it’s possible to pinpoint certain childhood circumstances as causal: “So everything from air quality to noise to access to food ... These things all matter for children who are trying to grow up in neighborhoods that are sub-optimal for children’s well-being.”

Chetty’s findings reveal disparity well beyond the East End neighborhoods cited above. In a tract comprised of Beltzhoover and Bon Air, children have grown up to earn an average of $31,000. Residents in a Brookline tract, just south across Route 51, earned about 50% more per year, at $46,000. 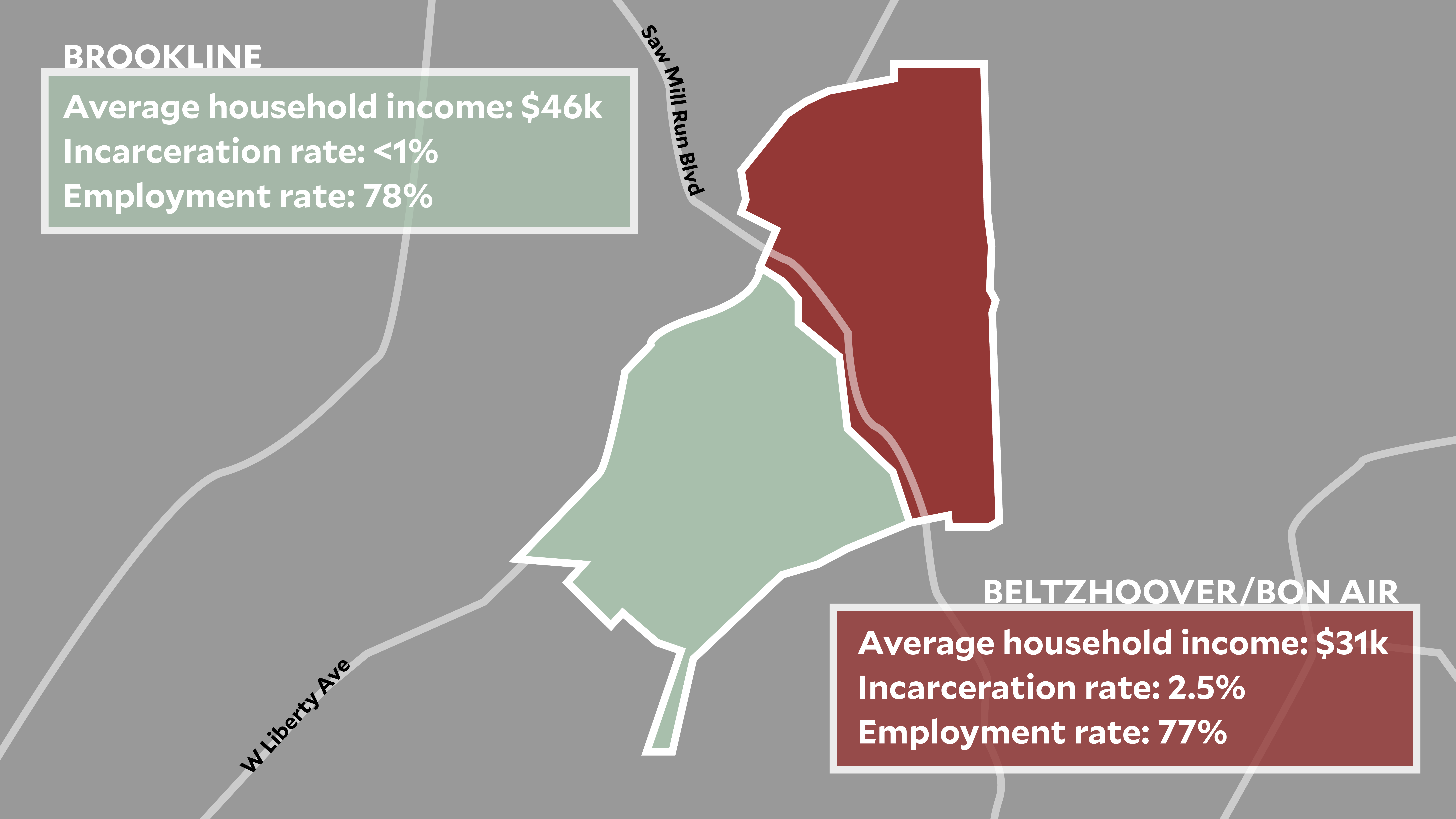 On the North Side, Northview Heights residents earned $13,000 a year, on average. In the immediately adjacent Reserve Township, just outside of the city, that figure is $58,000. Incarceration rates for the day of the last census were 11% and less than 1%, respectively.

So why do some neighborhoods offer better opportunities for kids to escape poverty while others may trap them? And what elements of a neighborhood most affect children’s level of success?

“Neighborhoods create a set of experiences, connect us to certain social networks,” said Anita Zuberi, assistant professor in sociology at Duquesne University. “Thinking about neighborhoods as contexts of development is probably a helpful way to think about it.” Zuberi points out that where you live as a child can determine how much you’re exposed to crime, gun violence and even mental and physical health hazards.

In a 2016 paper for the International Journal of Environmental Research and Public Health, Zuberi and co-author Samantha Teixeira noted that environmental problems and disparities can negatively affect youth, acting as a “slow violence” over time. 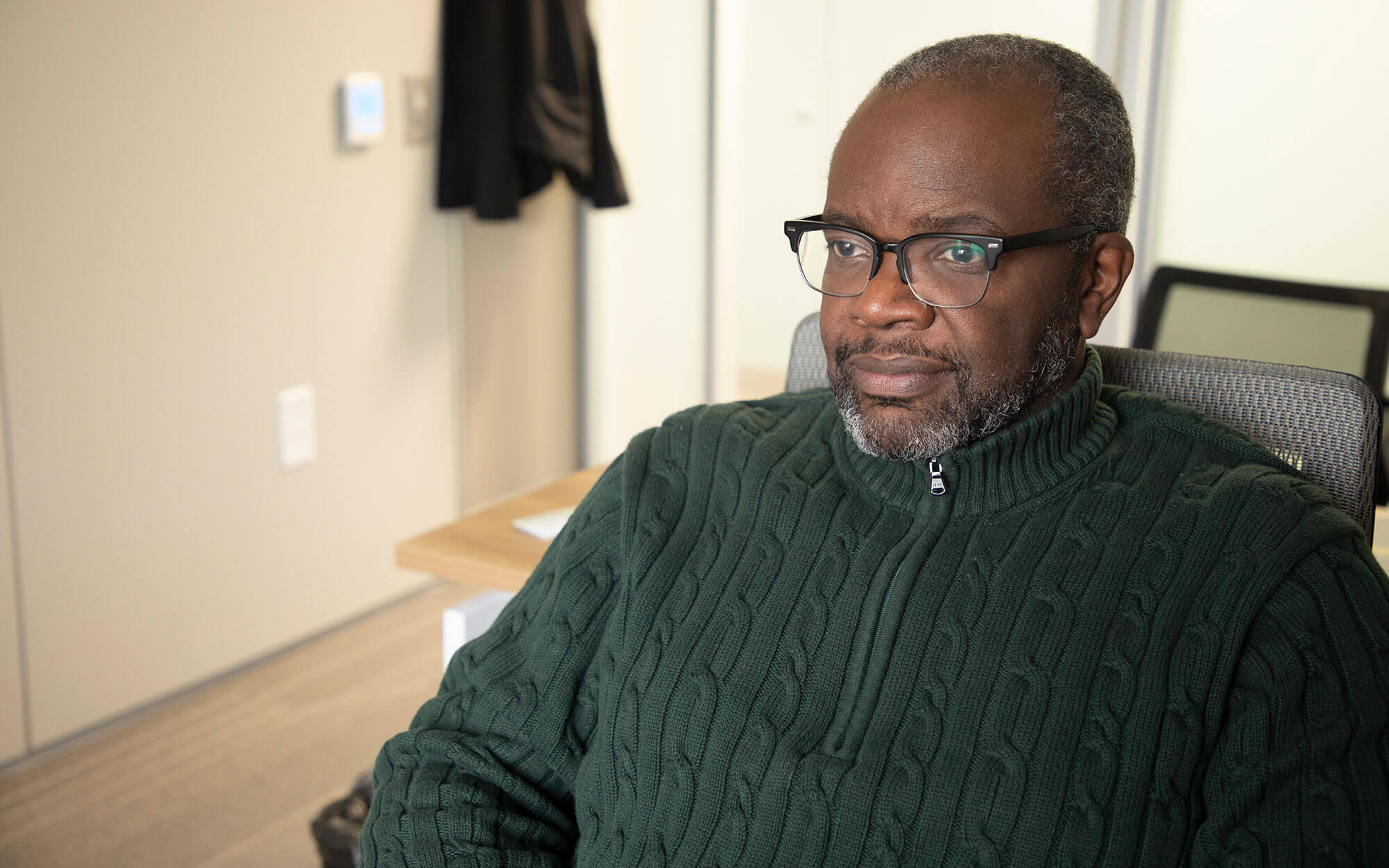 John Wallace Jr. is pastor of Homewood Bible Church and professor of sociology at the University of Pittsburgh, as well as co-founder and board president of Homewood Children’s Village. His work focuses on the well-being of Black children in disadvantaged communities. (Photo by Kat Procyk/PublicSource)

Their paper examined maps, presentations and photographs made by Homewood youth, as well as interviews with them, to understand how they viewed their neighborhood. The youth had taken pictures of litter, illegal dumps, vacant lots and shuttered homes, and they talked about how gun violence affected them. Teixeira and Zuberi used this qualitative data to pinpoint elements of the neighborhood affecting them — using “youth perceptions to inform our understanding of what aspects of a neighborhood’s built and social environment shape youth well-being,” they wrote.

One participating youth, anonymously quoted in the study, said that, “[I]f we didn’t have all these abandoned houses and people started moving here ... Homewood would be a much better place.”

In turn, according to another article on this research by Teixeira for the Journal of Adolescent Research, “[T]he research has begun to establish a link between environmental features, and more specifically, abandoned properties, and health and social outcomes among adolescents.”

“Neighborhoods create a set of experiences, connect us to certain social networks. Thinking about neighborhoods as contexts of development is probably a helpful way to think about it.”

Still, many of the youth also felt the emotional weight of stigma associated with these issues and the neighborhood itself.

“The reality is, there is no perfect neighborhood,” Wallace noted, “and each of our neighborhoods has its unique set of challenges.” He emphasized the need to not only consider the deficits of any neighborhood, but also assets such as businesses and community organizations doing good work.

Larry Davis, professor and dean emeritus for the School of Social Work at the University of Pittsburgh, commented on the role of a neighborhoods’ social capital.

“It’s also the social support system. Mom babysits my kids. Uncle takes me to the barber shop.” People count on that system, he said, if they have it. If they don’t, possibly due to forced relocation or impoverished circumstances, then positive outcomes are more difficult to achieve. And that social capital can’t easily be created or recreated somewhere else.

“Sometimes it’s social capital that allows you to get by day to day, which is especially important if you’re lower income,” Zuberi said. She noted that neighborhood networks can provide connections to internships and jobs, for example.

Still, residents within a neighborhood aren’t going to respond uniformly to any set of circumstances.

In a 2014 literature review for the Annual Review of Sociology, sociologists Patrick Sharkey and Jacob Faber of New York University noted the need for “more complete evidence designed to capture the lived experience of individuals as they navigate their residential environments over time.” They advocate for “research that examines where, when, why, and for whom do residential contexts matter.” As much as data analysis can help us understand neighborhoods, it’s still important to consider other ways of researching how individuals react to their circumstances, such as through ethnographic studies. 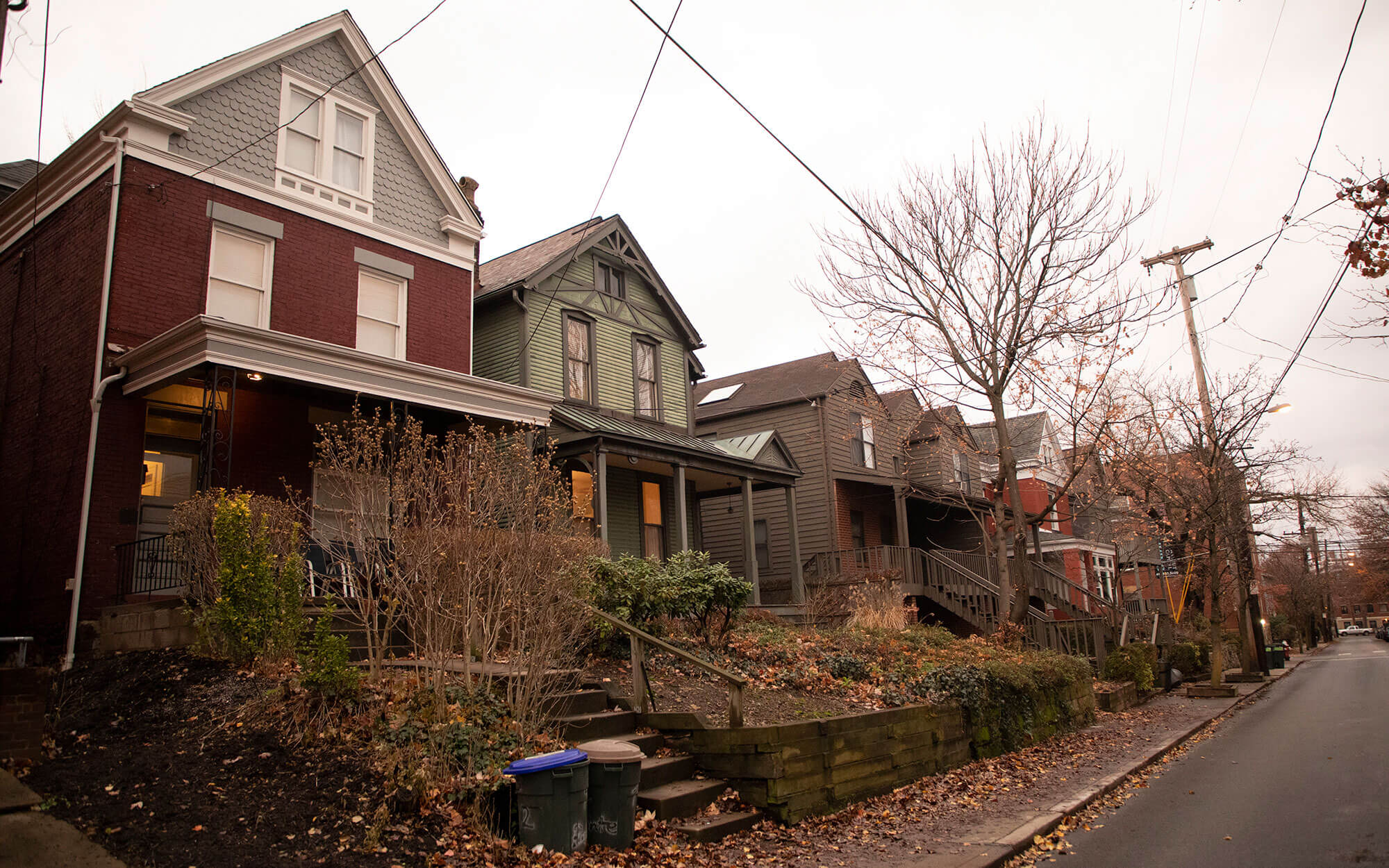 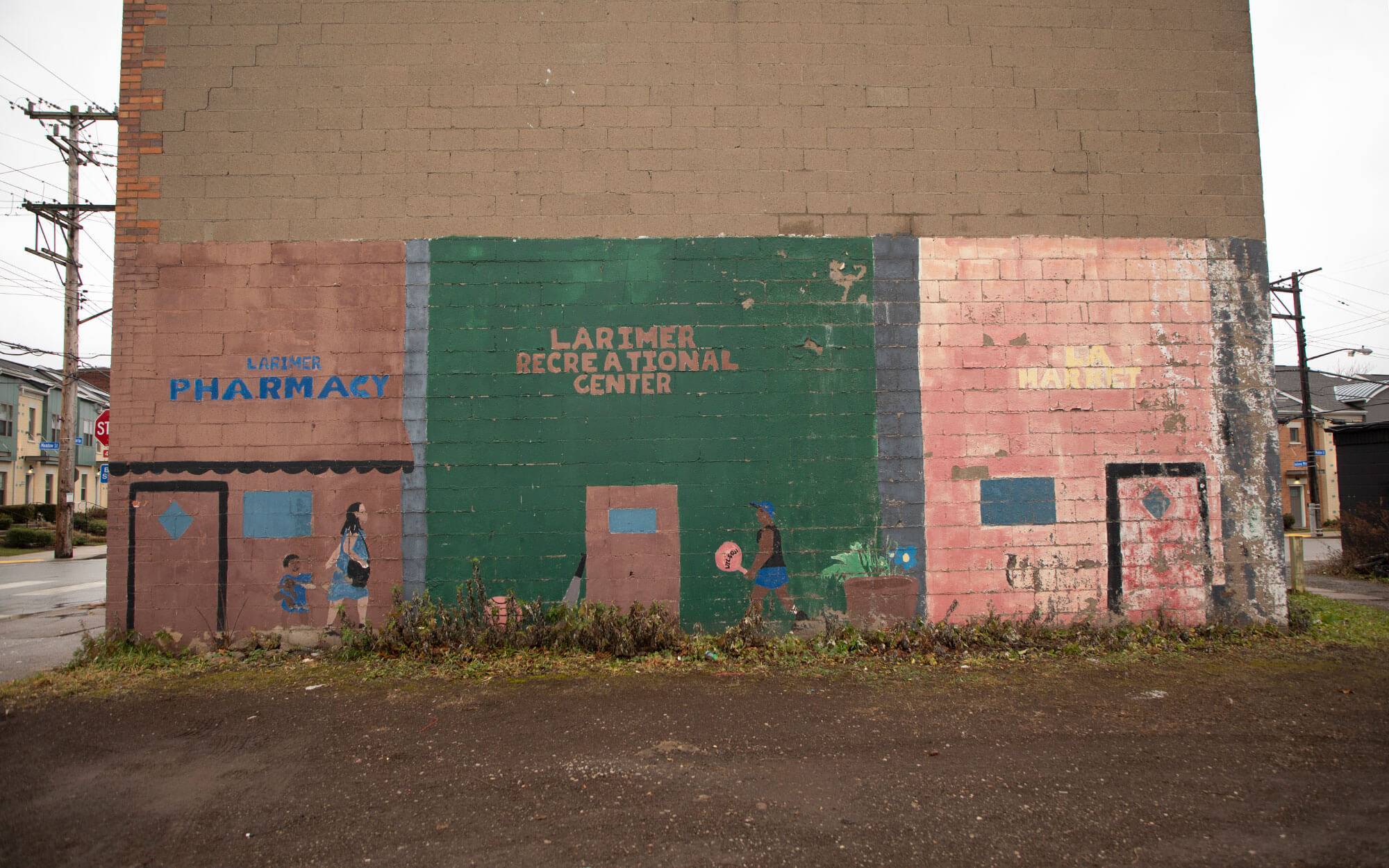 Nonetheless, analyzing neighborhood groupings and even specific demographics within those neighborhoods can help. Sharkey and Faber found that girls moving from high-poverty to low-poverty neighborhoods tend to experience more positive outcomes than boys making the same move.

Some research has looked at the effects of moving families from a high-poverty neighborhood to a low-poverty neighborhood by giving them housing vouchers. The Moving to Opportunity Experiment in the 1990s found that children in these families, in such cities as Baltimore and Chicago, went on to earn substantially more than their counterparts in the previous neighborhood. Chetty’s analysis affirmed these findings: “Moving to a neighborhood that is just a mile or two away can change children’s average earnings by several thousand dollars a year and have significant effects on a spectrum of other outcomes ranging from incarceration to teenage birth rates.” 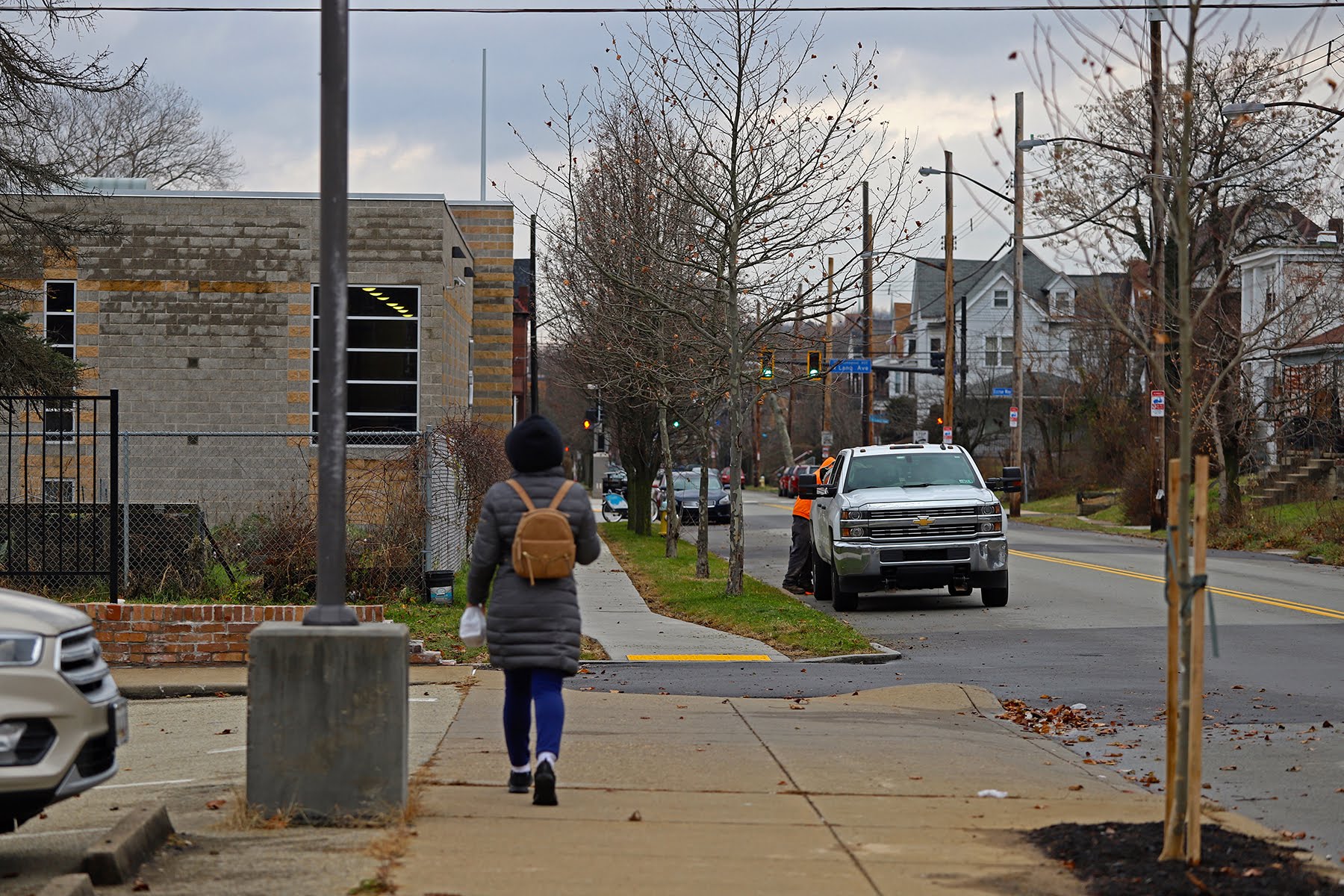 A resident walks down Bennett Street in Homewood. (Photo by Jay Manning/PublicSource)

Of course, the solution can’t be to simply have everyone move out of a neighborhood, Davis said, and, as it is, many residents don’t want to move, much less have resources to move. “Move to where? How do you move? Do you have enough money to move?” he said. “People don’t have enough to start a new apartment or buy a new house.”

“...So poverty creates and arguably recreates the results that people experience.”

“...So poverty creates and arguably recreates the results that people experience.”

Because neighborhoods change slowly, as Chetty’s research highlights, the possibility for real economic mobility is slim.

Chetty notes that their research has significant implications for civic leaders and policy, in the area of affordable housing in particular. Cities can use this data to help families choose where to live and, more specifically, where to use housing vouchers or locate programs, effectively using limited funds for the best results.

Williams described a recent meeting in Washington, D.C., where officials were kicking off a new affordable housing strategy that used this data to target neighborhoods with better outcomes for low-income children. “That really is exciting to see their housing department, the mayor’s office, the planning department, really thinking around all of the different policy levers they can pull to really create more access throughout the district for their residents,” he said.

Chetty and his research team are finding that it’s possible to determine which neighborhoods have helped people climb out of poverty. They suggest targeting voucher use there, rather than simply targeting any high-income area.

“So it’s not just that wealthier neighborhoods are better neighborhoods,” Williams said, noting that The Opportunity Atlas provides complex information beyond simple data such as poverty rates. “It’s really more about, ‘What is the tangible impact of these places on the kids who grew up there?’ ... So maybe in some of these places the low-income families aren’t able to tap into all of the networks of the high-income families. [The data] can give us a much more nuanced approach that lets us go beyond some of these surface-level factors.” 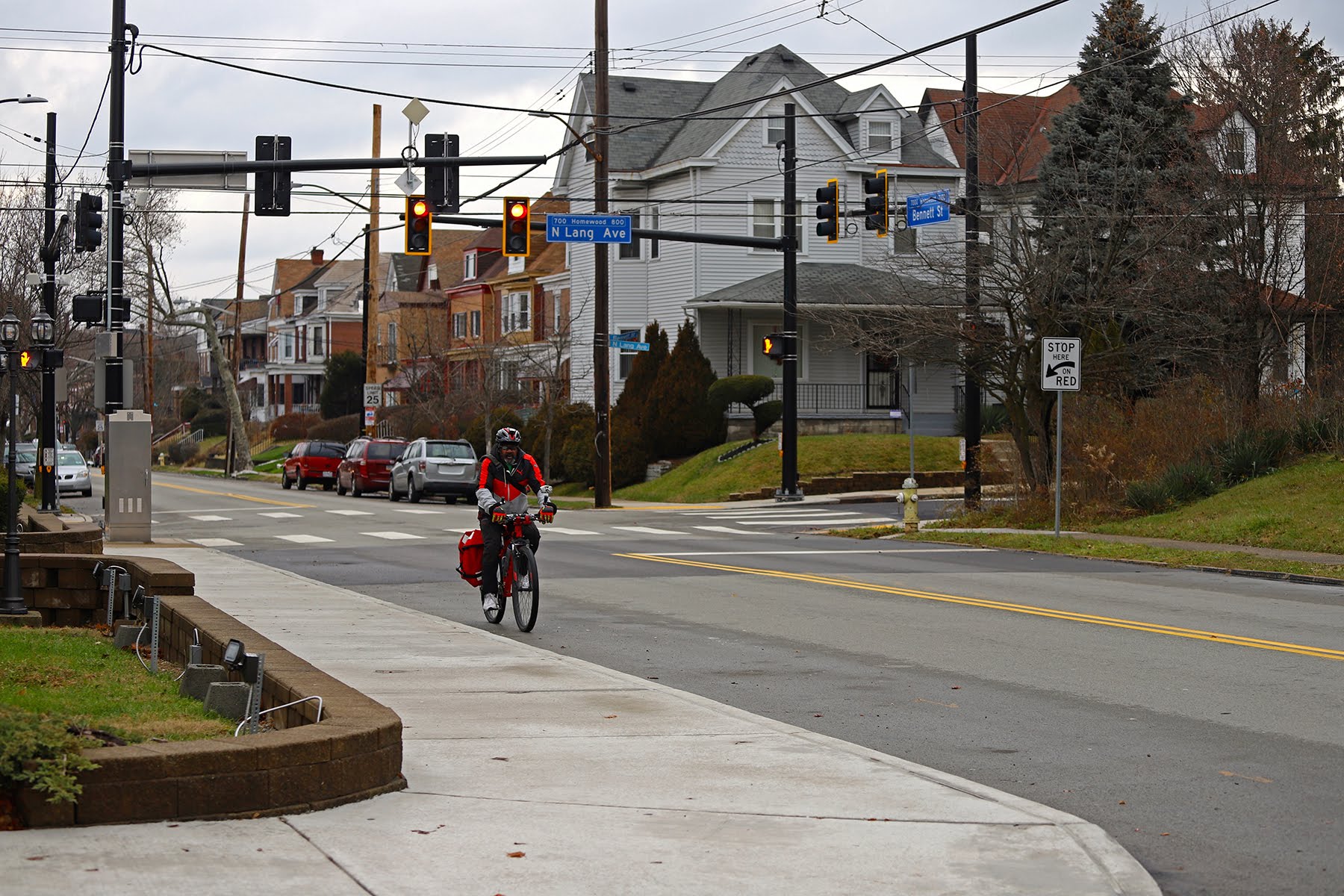 A man rides his bike down Bennett Street in Homewood. (Photo by Jay Manning/PublicSource)

Williams also emphasized the need to ask, “[H]ow do we knit together all the different programs and services that can take [youth] from birth through college and into stable careers?”

Chetty’s team wrote that the data can help leaders determine programmatic investments: “For example, the placement of preschool programs or eligibility for local programs or tax credits could potentially be informed by these data.”

It’s this kind of investment that can help people transcend generational poverty.

In his book “Why Are They Angry With Us: Essay on Race,” Davis addresses any claim that people should be able to achieve success regardless of neighborhood circumstances. “... I ask, if positive life outcomes are so independent of the social environments of children and instead are due to individual initiative alone, why do the privileged spend so many tens of thousands of dollars per year on their own children to provide the most positive of environments? I would ask them why then don’t they let their own children take their chances with whatever environments they might happen to encounter.”

*The Opportunity Atlas presents the findings of a longitudinal study examining the roots of economic opportunities, locating them in the neighborhoods where children grow up. The study’s methodology accounted for several variables within the data set.

Mark Kramer is a freelance writer and creative writing teacher based in Pittsburgh. He can be reached at mark@mnkramer.com.

This story was fact-checked by Matt Maielli.

This project has been made possible with the support of The Grable Foundation.